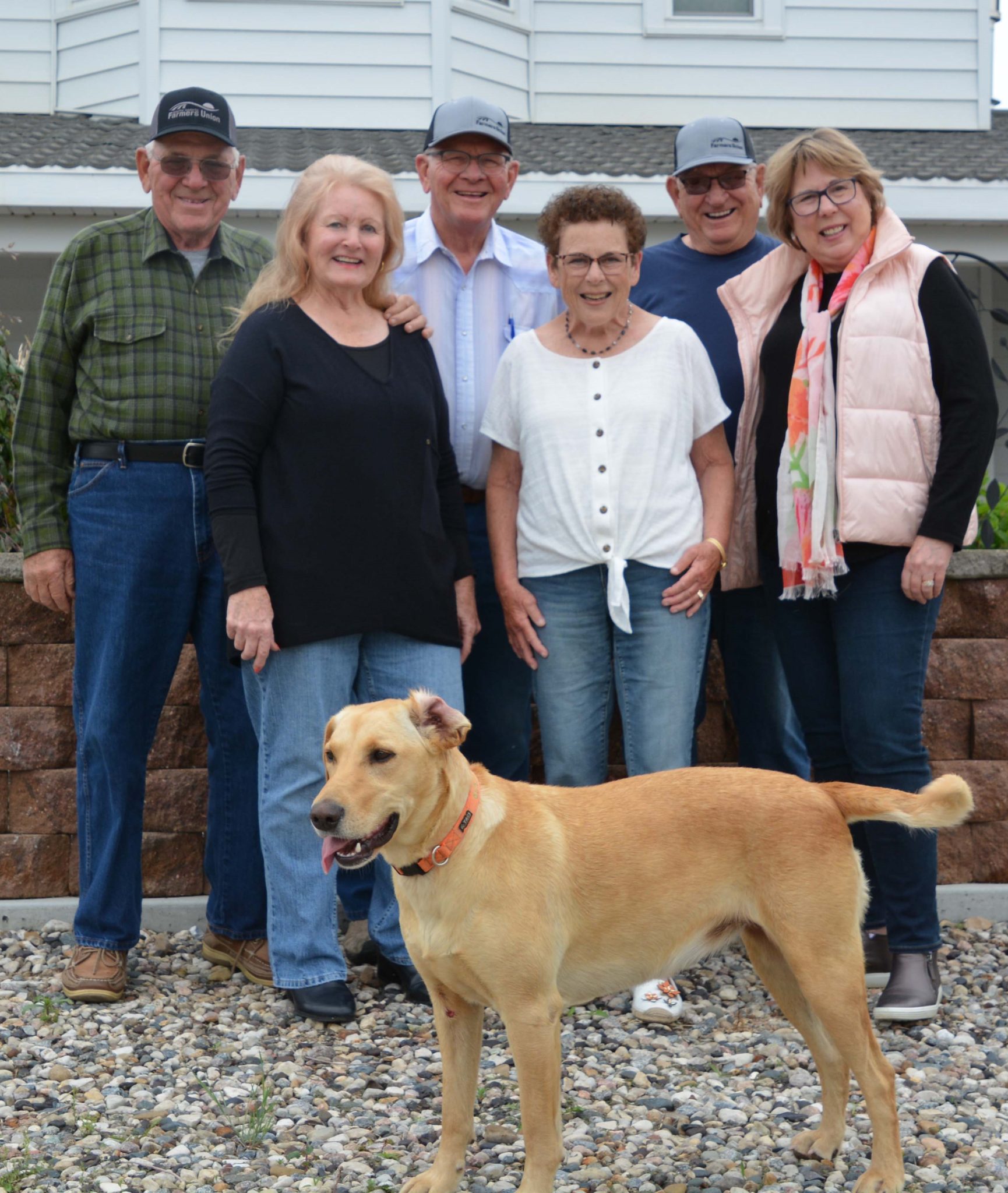 The old red milk barn is gone now, but for the three Baruth brothers, Larry, Tom and Ron, many memories remain.

“We started milking cows by hand when we were 5,” explained Tom, the middle brother. “We were all excited when we got the milking machines because it meant we had time to play baseball.”

“Once in a while, if we played too much ball, the cows would kick the machines over. So, we’d clean things up, hook up two more cows and go out and play some more ball,” added the youngest brother, Ron.

It was a small herd – only 10 or so milk cows – but enough to keep three boys’ pockets lined with spending money (their parents let the boys keep the egg and cream checks). Even today, nearly six decades later, the men recall most of their milk cows’ names: Princess, Fawn, Pepsi, Frieda Goner, Star and Brindle.

“Brindle would kick with both legs – even with the kickers on,” Larry, the oldest, recalled. “We would take a rope and tie up one of her back legs so that we could milk her. It got to be too much and she turned into a nurse cow. She was a good nurse cow.”

There’s quite a few chuckles as the brothers recall growing up on their family’s farm near Alpena.

Sitting in their machine shed with their wives, the men talk about life on the farm and how it shaped who they are today. Their family farm is where they learned the value of hard work, but also the importance of taking a break to have some fun.

“We all played sports,” Ron said “But we had to get the milking done before we could play basketball or baseball. Mom and Dad came to every game, so we would ride with them.”

They credit their dad, Ernest, with their work ethic and their mother, Myrtle, with ensuring they had an opportunity to experience life off the farm. “She was really the one who got us to where we could do some things like play sports,” Ron said. “Dad had been raised just to work.”

Born in 1911, Ernest’s parents moved to the Alpena area from Nebraska when he was 11. Times and circumstances were not kind to the family, and as a young teen, Ernest ended up living and working for a successful farmer, Edgar Knox, who eventually became his stepfather.

“They would put the hogs on a train in Alpena, and send Edgar to ride along with them to Chicago,” said Larry, recalling a story their dad told them.

Over time, Ernest and his brother, Harlowe, started farming together. But in 1941 when the U.S. went to war, they had a tough decision.

“The U.S. government said, ‘one of you has to go into the service and the other one of you can stay and farm,’” Larry said. “Harlowe was married at the time and Dad wasn’t, so he told Harlowe he would go and Harlowe could stay and farm.”

Ernest joined the Navy and served as a welder on a small destroyer, the Rathborn. It wasn’t too long after he joined the Navy that he married their mom, Myrtle Bergeleen.

To be near Ernest, Myrtle moved to San Diego, Calif., and went to work for an aircraft manufacturer.

“The day Larry was born, Dad was shipped off to the South Pacific,” Tom said.

Ernest would meet his firstborn, around the time that Larry turned 1.

“His ship was hit by a kamikaze plane. Dad helped patch the hole to keep it from sinking,” said Larry, who recently learned of his dad’s bravery through research. “Dad’s name is noted in the ship’s archives.”

Ron points out that because the conversation about their family’s farm is taking place on June 6, 2022, it is appropriate to be discussing their dad’s World War II service. “This is D-Day. Thousands of young men died on this day,” he said.

Larry opens an envelope and pulls out an old black and white photo of their dad and Uncle Harlowe working on a tractor. More than likely, their Grandpa Knox took the photo in this same farmyard.

When he returned home after the war, Ernest purchased the farmstead and land from his brother, Harlowe, with the help of his stepdad, Edgar Knox. “Grandpa Knox told Dad that he would help him buy the farm as long as Dad would let him come out and work whenever he wanted,” Ron said.

In addition to the small dairy herd, Ernest’s farm had a cow/calf beef herd and feedlot along with hogs. The family also raised corn, oats, alfalfa and prairie hay.

After high school, all three Baruth brothers went on to college. Ensuring that their sons received a college education was important to their parents.

“That was their gift to us for working on the farm,” Tom explained.

The men again credit Myrtle for their focus on education. Their mom completed high school in three years and received a

teaching degree before she married their dad. Throughout their childhood, she worked to achieve a master’s in education.

“I knew I was disposable,” Larry said. “Times were tough in the steel industry. I saw guys laid off who had been working in their jobs 20 years.”

So, when Ernest fell off a ladder in 1972 and asked Larry to take vacation time to help cultivate corn, it didn’t take too much to convince him to return to the farm full time.

“He told me he thought he would have to sell the farm because he was too injured to work and it was just him on the farm at that time. That was a wake up call,” Larry said.

Ron felt the same way. He also gave his notice and returned to the farm.

A few years later, Tom came back to the farm as well. He brought his wife, Sheila, and their firstborn, Shayna.

“The farm next door came up for sale, and I knew that if ever I was going to come back to the farm, this was the time,” Tom said. “And Larry and Ronnie said, ‘you know, if ever you want to come back, we invite you to come back.’”

It was 1976, and with four adults drawing a salary from one farm, it wasn’t easy. “Mom always made sure we could make ends meet,” Tom said. “And Larry and Ronnie were very kind. They were not married at the time and they were living with Mom and Dad so they didn’t have many expenses. Sheila and I had a child, so we had a lot of expenses. They said the farm needed someone to keep the books, so they designated that job to Sheila.”

“And we did not have any debt,” Ron added. “If we could not afford it, we did not buy it.”

They add that along the way, they also had a bit of luck.

“We never had to get in a bidding war for land,” Larry explained. “And when it came up for sale, it was a reasonable price.”

“Many times, people came to us and asked us to buy their farm ground,” Ron added.

“We are honest and people knew we would treat them right and treat their land right,” Tom said.

With his sons managing the crops, cattle and hogs, Ernest spent more time doing what he loved most – fixing machinery.

“With Dad and two engineers, we could always buy something that needed fixing and fix it,” Tom said.

Ernest lived in the big white farm house where he and Myrtle raised their sons until he passed away at 97.

“Nearly every day he said, ‘I am really lucky. I have my boys and I have everyone here I love but one.’ He was talking about Myrtle. She died when she was only 65,’” Sheila shared.

Today, Larry and his wife, Jan, live in the original farmhouse. Tom and Sheila live just three-fourths of a mile west and Ron and Deb live two miles southwest.

All three men say they appreciate the fact that early on, their dad let them make management decisions and do things different from how he had done them.

No-till field management is one example Ron shared. The men began no-till field management in 1990. “One year the corn was very dry. We still had time to plant wheat after we got the corn off. There was some moisture in the soil, but we knew as soon as we tilled it would be dry. So, we got to looking around and John Deere made a no-till drill. We no-till planted the wheat and got a good stand. We decided right then and there this was the way to do it.”

Ron and his brothers began following the work and research of Dwayne Beck, the Research Manager at Dakota Lakes Research Farm.

“He got us into double cropping,” Ron said. “We would plant winter wheat, take the winter wheat off and go in and no-till drill Sudan grass and chop it for cattle feed.”

How does a farmer retire?

After Ernest’s death in 2009, the brothers began discussing the future of their family farm. They met with a financial adviser who said they needed to divide up ownership oftheir farm acres.

“He told us we faced a disaster if one of us died. It was great advice,” said Larry, who has faced some health challenges over the last few years. He became extremely ill after he contracted West Nile from a mosquito bite. And in 2019, he had triple bypass surgery.

In 2010, Larry and Jan decided to start wintering in Arizona, not long after, the brothers decided the timing was right to sell out of the cattle business. “Our cattle operation was too big for two people to run,” Larry said.

Jan can be credited for getting the brothers to purchase long-term care insurance. “She said, if you go into the home and you do not have insurance, what have you been working so hard for all these years,” Ron said.

In 2015, Ron’s first wife suffered a devastating accident and needed around the clock care. “With long-term care insurance and social security, we were able to make the monthly $6,600 payments,” Ron said.

Nearly a decade after getting out of the cattle business, a friend who helped plant and harvest was no longer able to help, and the men decided it was time to retire.

“We didn’t want to have to hire a bunch of employees and we thought we better retire while we are all still living,” Larry said.

“We were sitting right here, in this machine shed talking about our options and Ron said, ‘I think we are done,’” Tom said. “We always knew that if one of us was ready to quit, we would all quit.”

Beginning spring 2020, the men all decided to lease their land to area farmers. “I thought it would be tough not to plant in the spring, but I actually enjoy watching the young farmers plant,” Tom said. “All our renters are good farmers.”

Ron agrees. “It got to the point where I could not physically do the work like I used to. I have had surgery on both rotator cuffs – it was good timing.”

Retirement from a lifetime of farming does not happen over night. Throughout their entire farming career, the men shared equipment and machinery. They just wrapped up their fourth online auction.

“We met at our house and sat with some beers and watched the bidding on our big screen,” Ron said.

Because they all own farmland separately, they each have different plans for what will happen when they are gone. Ron’s plan is that his land will one day become The James River Valley Research Farm. “I did not want my land to get gobbled up by a huge farmer. I wanted to give back to research because it is part of what made us successful.” 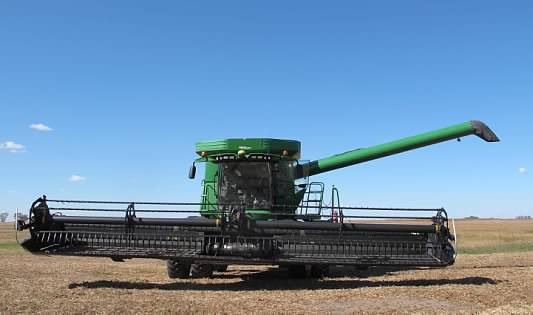 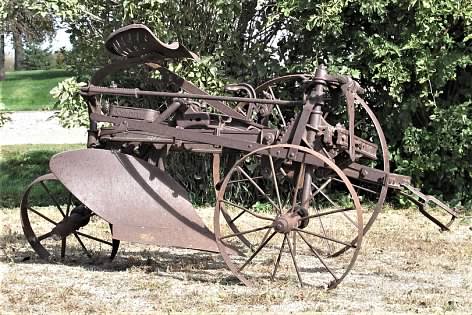 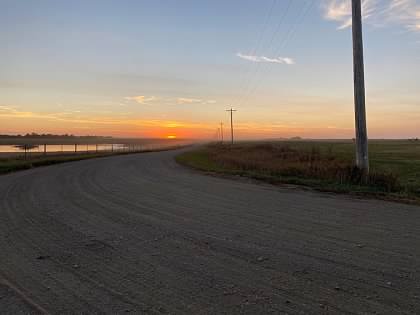 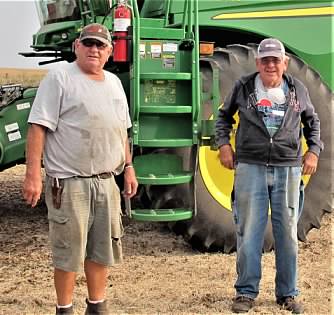 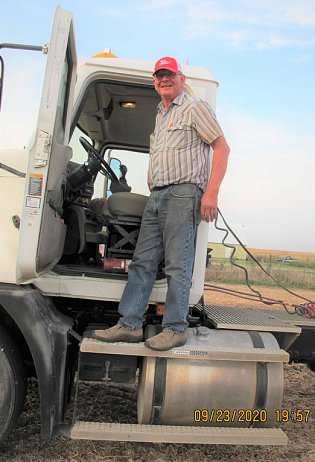 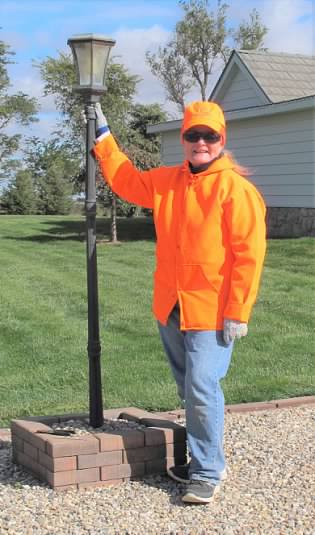 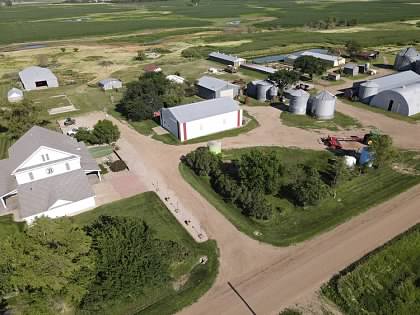 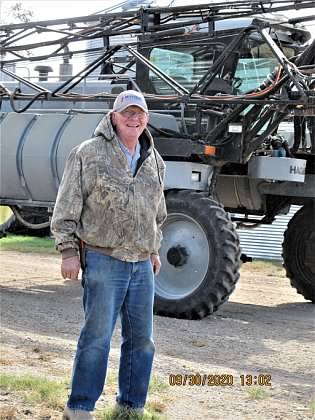 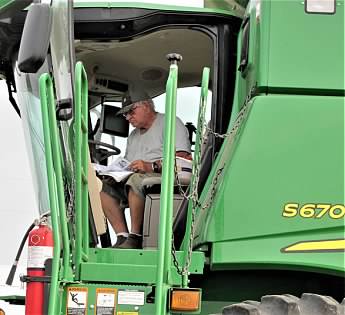 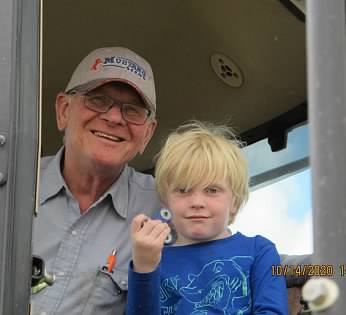 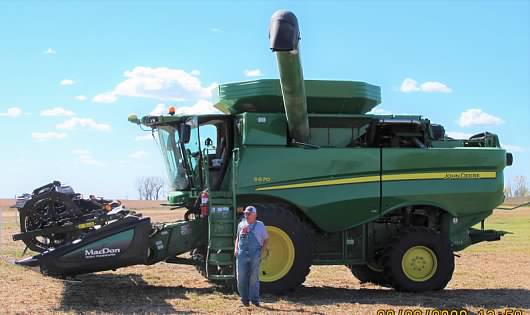 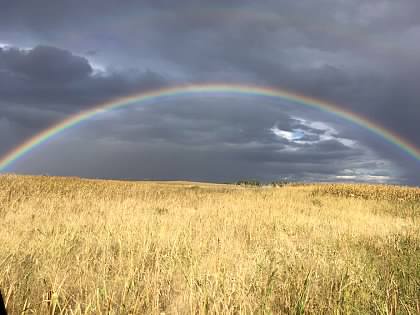 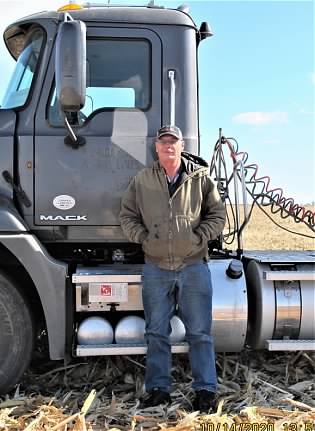 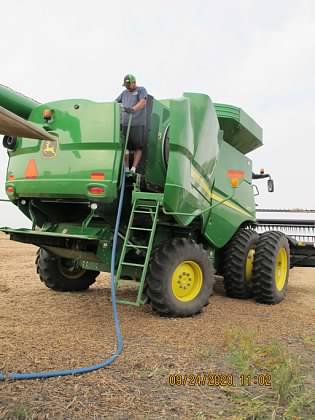 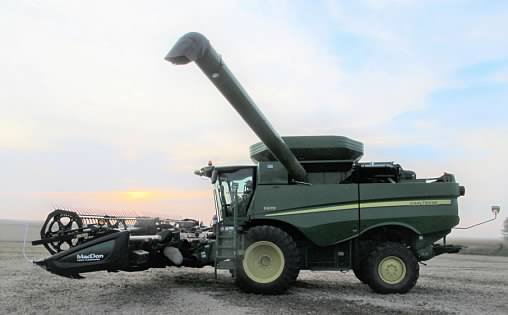 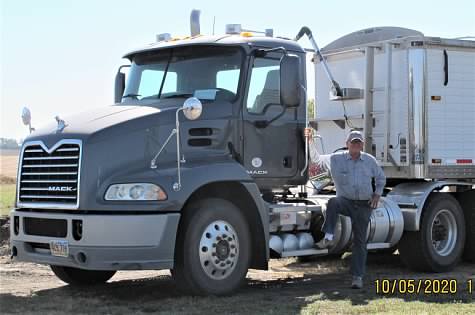 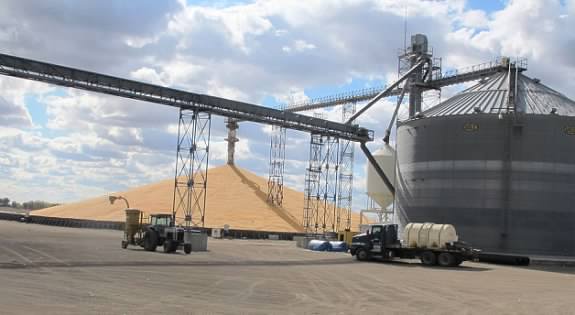 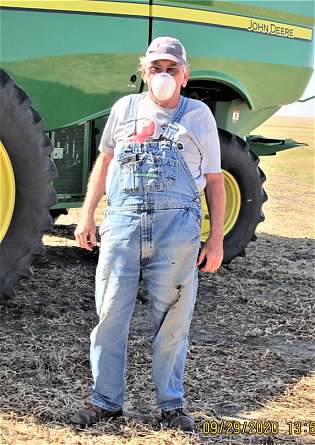 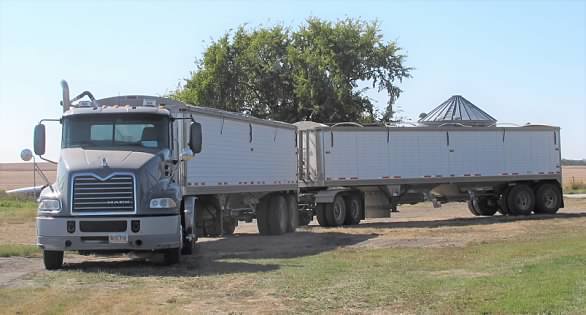 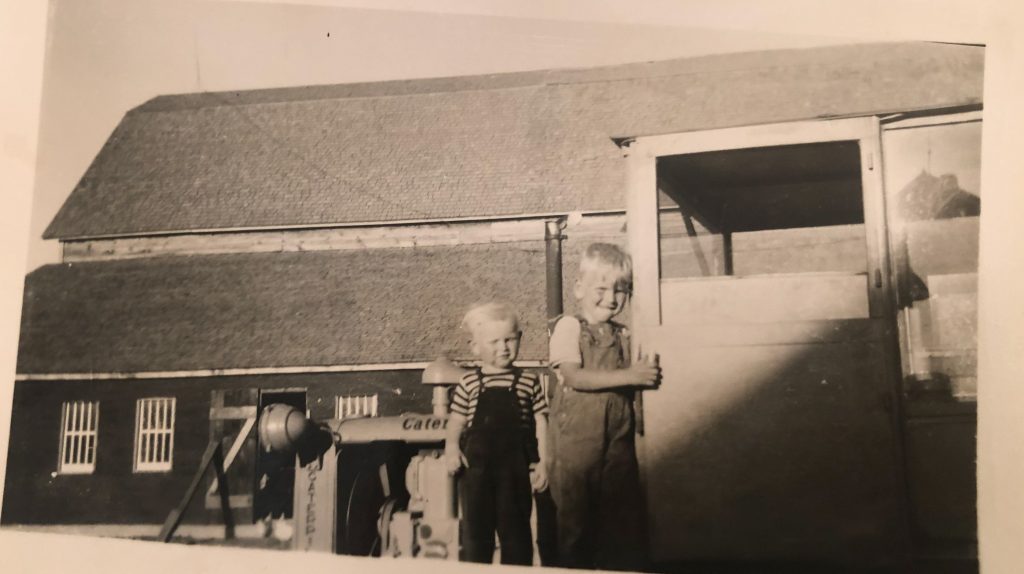 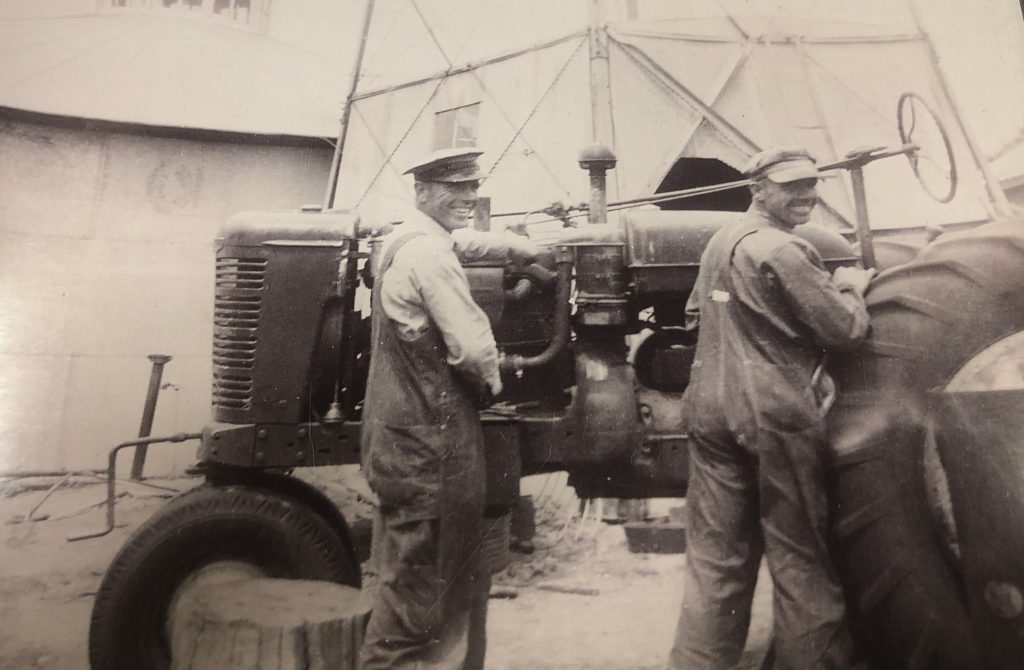 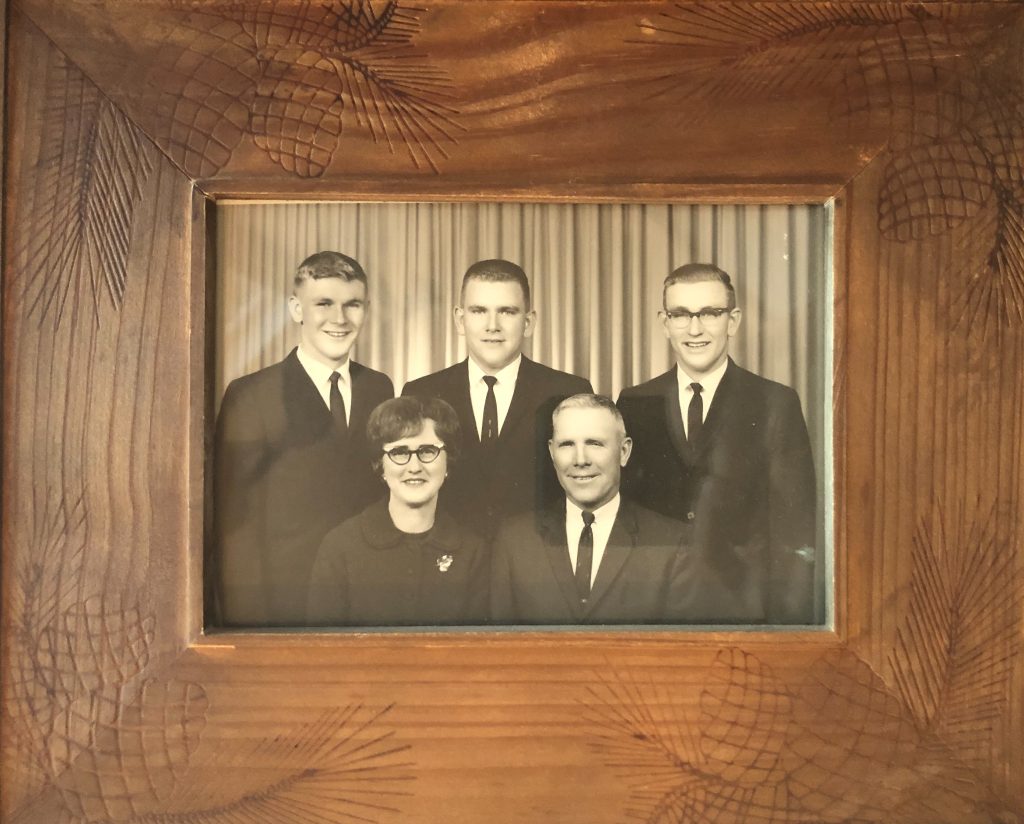