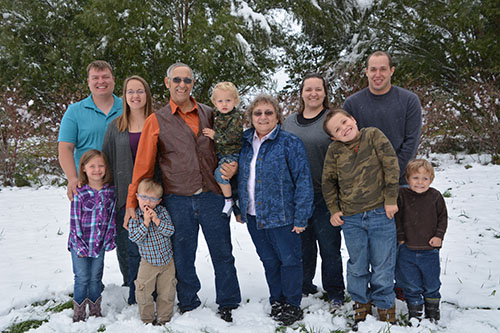 According to Joel Keierleber, flexibility is the key to success on his and Audrey’s Colome farm. “I am flexible and do what looks to be the most profitable way to use our farm ground,” explains the third-generation South Dakota farmer, of the strategy that has kept his farm more or less in the black the last 40 years. “Instead of trying to get bigger, I work to add value to the acres I already own. This has been my philosophy all along.”

It’s late fall, and Joel walks out into a field of cover crops to explain. “This was crop ground two years ago. Then, I put in cover crops and a good stand of alfalfa and hayed and grazed it this year. I will probably do that again next year. After that, it will go into corn.”

He doesn’t plant just one corn hybrid. “I always have to try something different. I want to plant several and see what will do the best. Some guys are content to do the same thing over and over – even for generations – not me,” Joel says.

This mindset carries over to his cow/calf herd. In the early ’90s he started finishing out his own cattle. But, if the feeder market was higher than fat cattle, he would sell at the feedlot.

“I never have one plan and stick to it. I sit down and pencil it out to see what will be the most cost-effective way to farm. That is what I go with,” he explains. When it comes to his family and his farm, Joel is resolute to “stick to it.” “I knew I wanted to farm from the time I was 5,” he explains.

Growing up on a dairy farm near Clearfield, the fifth of nine children, Joel was driving the the pickup to help dad feed small bales before he started kindergarten. “Back then, you got started early. I also had the calf chores.”

After high school, he took a course in diesel mechanics and returned home to help his dad, who was in poor health. About that time, his older sister introduced him to Audrey, a college student. Her first teaching position happened to be in the area. Four years later, they were engaged.

With a plan to save up money to buy their own farm, the couple eagerly anticipated their June 1977 wedding. Then, in March, Joel was in a serious farm accident – his arm was caught in a silo unloader.

Joel was home alone and had to drive himself to the neighbors.’ “I met him on the road. The son was in the National Guard and in the medic unit. They took me to the hospital, 25 miles away,” Joel recalls.

His injuries were severe. “They told me when I was in the hospital that I would never lift my arm above my head again. They told me to go back to school so I could get a desk job.”

But, Joel wouldn’t listen. He was determined to farm. “I figured I had not failed yet. You have to fail two or three times to see if you can succeed.”

Audrey stuck by him.

“When they told him he would never farm again, I said ‘no way,'” she recalls.

They married and Joel began therapy in Denver. Although he recovered most of his mobility, the trauma of the accident left Joel a type-1 diabetic at 23, a chronic disease he has had to manage most of his adult life. Today, he is currently on the kidney transplant list.

In 1978 they found their farm, 320 acres, three and some odd miles from Colome. It was a less than ideal time to get started. The Farm Crisis was underway, but somehow, with Audrey’s small teacher’s salary and a lot of pencil to paper, they made the payments.

They say it also helped that they were not in debt to expensive machinery – Joel bought used machinery in need of repair. He made the repairs himself. Their small farm was quite diversified. Along with cattle, Joel raised hogs and sheep. He custom baled, he ran the first Vermeer baler west of the River. In the summer, Audrey sold balers and parts. The couple also sold McNess Feeds. “We kept busy, but that was the way you survived,” Joel explains. “There were opportunities then that we don’t have today – doing little things like selling hog, sheep and dairy feed – that you can’t do today.”

Forced frugality led Joel into no-till farming. “We couldn’t afford to do tillage. So, I started failing at no-till in 1980 and finally succeeding by 1986.” He now operates 2,000 acres.

A soil test he took when he began changing his tillage practices showed his soils were depleted. “They were only at .8 percent organic matter. They didn’t hold moisture and it was a drought period, so if your soils can’t hold water, it doesn’t pay to put fertilizer down.”

Joel read everything he could on building soil health. He attended workshops. He began rotating crops, hay and cattle. Recently, he introduced cover crops to his rotation. His efforts paid off. Today, soil tests show the organic matter of Joel’s fields between 4 and 6 percent.

“Our crop yields gradually started improving. I figure if I can get organic matter to 4 or 5 percent, I wouldn’t have to fertilize. This year we raised 200-bushel corn and I only applied 50 pounds of nitrogen per acre, No-till is the most cost-effective practice over the long-term. It’s not a one-year solution.”

In addition to building up their farm’s soil health, Joel and Audrey planted thousands of trees. “When we moved here, there wasn’t a tree in sight. We plant 5 to 6 acres at a time. My dad was the same way. I grew up planting trees. My brothers and I hoed trees until we had blisters.”

Seeking cost-effective solutions also motivated Joel to modify his herd’s genetics. “I started downsizing the cows’ frame. We found our big cows never produced big calves. Not even in the feedlot, and the 1,150 to 1,200-pound cow made us the most money,” Joel says. “My smaller cows are probably eating 20 percent less feed as well.”

Joel also focuses on calving ease and strong udders. He breeds his herd to calve in May. “I don’t want to babysit those calves.”

Because it’s just him and Audrey, he breeds and culls based on disposition. “When I move my cows, I just holler and they follow me.” He rotationally grazes pasture areas so the cattle are moved frequently.

To reduce stress at weaning for the calves and the Keierlebers, Joel does not wean in October. Instead, he weans around the holidays.

“The calves are used to eating feed by that time, so I wait for a warm spell around Christmas or New Years and wean. I used to treat a lot of sick calves each year, now I only treat one sick calf every two to three years.”

Because breeding season on the Keierlebers’ farm is August, they don’t currently AI, but purchase bulls instead. This year, Joel is trying yet another new idea. He bred his cows to AKUSHI bulls, known for producing the high prime Kolby beef sold to Japanese markets. When Joel learned he could receive premiums as high as $250 a steer, he thought, “I just as well try it.”

Audrey retired from teaching in 2007. It was a career she enjoyed and the family needed the income and insurance to make it farming. So, when it came to parenting, they say it was a team effort. Together, they raised their daughters, Brecky and Christine.

“I only had 10 days of sick leave when I had Christine. She was born on Dec. 23, so I also had Christmas break, but, she had colic. There were many nights when I would wake up and Joel would be bouncing her,” Audrey recalls. “Then, when they were older, I would have to be at school by 7:30 and in the early years I taught nearly 30 miles from home, so it was up to Joel to get the girls up and fed and ready for daycare.” By the time girls were in school, she only had to drive 8 miles.

Today, Joel and Audrey are active and involved grandparents to Davin, Jaren and Kaston Cwach and Jocelyn and Noah Wood.

When their daughters went off to college, Joel began to get more involved in South Dakota Farmers Union. First serving as Tripp County President and then serving as District 4 President. He spent 10 years serving on the state board of directors.

“When there is a need, someone needs to do something. It gets to a point … maybe I do it out of frustration,” says Joel, who retired from the board of directors in 2018 due to health. “When you are on the kidney transplant list, you have to be within three hours of the hospital at all times. I also do dialysis four times a day, so, we have learned to work our schedule around that too.”

Even with his health challenges, Joel remains determined to farm. He is currently penciling plans for growing season 2019.