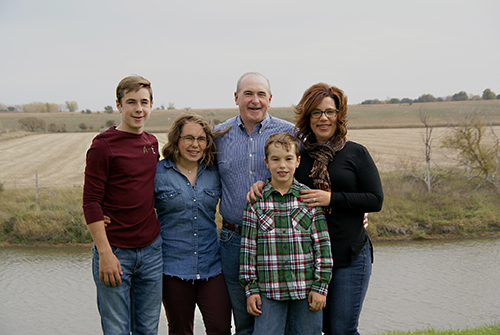 The phrase, “That will never work,” doesn’t slow BJ McNeil down.

Not when he converted 4,000 acres of his grandpa’s conventionally tilled land to no-till. Not when he was among the first Wessington farmers to plant Roundup Ready soybeans. Not when he decided to plant cover crops.

If anything, hearing the expression has only motivated the fourth generation farmer.

“I am confident in my own decisions and what I want to accomplish ­ it’s just my nature,” BJ, 46, explains.

His aunt and business partner, Jonnie Zvonek, says it’s in his genes. “You have your grandpa’s attitude.  You just don’t quit.”

When Jonnie was born, she was the third of four daughters and his namesake.

“I was always with dad ­ I was basically his ‘son’ John,” Jonnie recalls.

After high school Jonnie tried working off the farm. She moved to Sioux Falls and worked for the Argus Leader as a typesetter for nine months.

“I felt claustrophobic,” she explains. “I always loved getting my hands in the dirt and watching things grow – so, I asked dad if I could come home and farm full-time.”

Working side-by-side with her dad, Jonnie was involved in every aspect of the farm: planting, harvesting and bookwork.

In the summer, her sister Sheryl’s son, BJ, would spend much of his time on the farm.

BJ says although he didn’t know it at the time, it was those summer vacations spent on the farm that instilled in him a passion for working the land. This passion eventually led him to pursue a degree in Agriculture Engineering from Texas A&M.

“I first tried aerodynamics because I wanted to be a Navy pilot. Then I transferred to business. I had no passion for any of the classes. So, I asked myself, ‘What do I love?’ The answer was, ‘I loved farming,’” BJ explains.

Shortly after BJ graduated from college, Wilmer passed away. BJ asked Jonnie if he could come back and farm with her. She said yes.

At the time, Jonnie was 43. BJ was 26. Even though there’s nearly a 20-year age gap, the two work as equal partners. They compare their business and family relationship to that of brother and sister more than aunt and nephew.

In the beginning, finances were tight. They didn’t have many farmable acres because Wilmer and his wife, Phyllis, had enrolled most of their farmland in Conservation Reserve Program (CRP). To make things work, BJ took a job with the Natural Resources Conservation Service (NRCS). He also started a seed company, Diversified Seed Genetics.

“We were in survival mode,” BJ explains.

As acres came out of CRP, BJ made the first of many innovative decisions Grandpa Wilmer would not have approved of. Rather than till the acres, he bought two pieces of new equipment and began no-till planting.

“My secret to success in farming has been the fact that what I know about farming I’ve learned from reading, taking classes or the internet,” BJ explains. “I didn’t go into this with preconceived notions about what wouldn’t work and I didn’t have Grandpa or Dad in my head saying, ‘That will never work.’” BJ had read about no-till and attended seminars by Dwayne Beck, manager of Dakota Lakes Research Farm.

Although she was nervous, Jonnie reluctantly trusted BJ because she knew he’d done his homework ­ and eventually BJ took ownership of the farming decisions.

No-till was more than a soil health decision. BJ was in expansion mode.

He was working to increase the farm’s profits in order to provide a stable income for Jonnie and his grandma, as well as his young family. By no-tilling acres, he and Jonnie were able to handle the work themselves. “I was able to do 90 percent of the work with two pieces of equipment,” BJ says.

Considering the local climate, the concept also made sense. “The fear around here has always been not enough rain. Then I asked myself, ‘Why are we drilling and giving up this moisture with every tillage pass?’” BJ explains.

“No-till has definitely improved the fertility of the soil as well.” Neighbors were watching and some were impressed by what they saw. Those looking to retire began giving BJ a call asking if he and Jonnie would like to lease their land. Their farm acres increased. In 2000, BJ was able to leave his job with NRCS to farm full-time.

“We have been very diligent and precise on the fertility we put into the soil; we don’t want to waste money,” BJ explains.

“All our acres are zoned. We know exactly what to put out where,” Jonnie added.

Today, their farm has grown by 400 percent. BJ and Jonnie rely on technology and a team of six full-time and two seasonal employees to keep things going.

“My mindset has always been “grow.” Grandpa was a large farmer for his time.

I never thought about being a small farmer,” BJ explains. “My farming philosophy is also about building a business that is sustainable not only for our family today, but for the future.”

As the farm increased in size and their employee pool grew, Jonnie’s role evolved.

Today she keeps all the books and provides home-cooked meals each day for their employees. “It was easier when Mom was still here, helping with the meals. Some days I drive about 100 miles delivering meals,” she shares. “When we hire, we tell our new hires that they are more than employees ­ they are family.”

With technology advancements, the farm’s data management has improved. All employees have smart phones and iPads. Everything from fertility prescriptions, input applications, yields and maps, tractor data to hours worked, inventory and product management are shared and managed via The Cloud.

“It keeps us all informed on what is going on ­ I can check in on what is happening on every acre from my iPad or desktop. It also prevents mistakes,” BJ explains. “In the past, you assumed what the guys wrote down was correct. Now, I can verify it. It makes everyone do a better job of record keeping.”

When it comes to budgeting, BJ says that it allows him to figure out which acres are making money. “I know what I spent on each field. I am not guessing or approximating.” “With commodity prices where they are, two years ago my mindset changed a bit,” BJ says.

He explained that his field management went from doing what was necessary to maximize production to managing input costs based on production. “This is a new era,” BJ explains.

To increase profits per bushel, BJ and Jonnie invested in larger trucks so they can haul grain to better markets. For example, last harvest they hauled yellow peas up to North Dakota because the market was $1.25 above the local price. They also make a habit of hauling corn to areas of South Dakota where ethanol processing increases the price per bushel. “We’re not making a killing, but it’s worth the effort to make a little extra.”

Although prices aren’t what they were five years ago, BJ reflects on his decision to follow his passion and knows he made the right choice.

“I have three passions in life ­ family, football and farming. In that order. I always tell my kids, ‘I don’t care what you do; if you have a passion for it, then do it!’” explains BJ, who together with his wife, Erica, has three school-age children.

Because Erica grew up a city kid, the family lives in Huron and BJ commutes

Looking to the future, BJ and Jonnie are not as focused on expansion these days, but on improving soil health and field management in every way they can.

“Every year we have several test plots running. Right now I’m working with an agronomist doing a study that looks at the impact calcium has on the soil,” BJ says.

As for the farm’s legacy, BJ hopes one of his children will carry on his passion for farming.

“Like most farmers, I want to build something that if my kids wanted to come back, they can ­ but only if they are passionate about it,” BJ says.