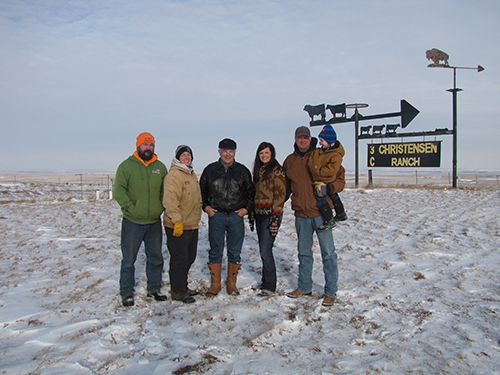 “My teacher caught me staring out the window one day, I was probably daydreaming about cattle. She moved my desk to face the wall. To this day, I can still see those gray boards of that one-room schoolhouse,” says the 64-year-old.

Classroom learning may not have captured John’s attention – cattle genetics on the other hand – for more than 50 years, they have driven an unquenchable thirst for knowledge.

“Cattle are my life,” John explains. “I’ve been making the mating decisions for this herd since I was 11.”

His passion is most obvious when you’re among the offspring. Point to any yearling bull or heifer in John’s winter feedyard and he recites their genetic strengths and bloodlines.

Calving out 600 cows most years, if John needs a reminder, he simply pulls out a worn calving notebook from his shirt pocket. He’s been keeping careful calving records since childhood. “I have only lost one book in all these years. I have 50 years-worth of books saved,” he explains.

Although maintaining pen and paper records may be a bit old fashioned, it is not an indicator of John’s attitude toward technology and genetic tools.

In the mid-’60s his dad, Jens, was among South Dakota’s early adopters of AI (artificial insemination). At 14, John went to AI school.

Beyond the basic birth, weaning and yearling weight data, John has been collecting maternal calving ease and carcass data since the 1970s. He utilizes ultrasound technology for carcass data and collects DNA samples to evaluate EPD (expected progeny differences) accuracy, and whether or not certain cows are homozygous black or homozygous polled.

All his cows are enrolled in the American Simmental Association database.

“John has a willingness to try something new and is always learning – always looking to find a new way to do things better,” explains his son-in-law, Tyler Fagerhaug.

“This year the horses are paying our operating loan, when usually it would be the cattle paying for the horses,” says Cam, referencing this summer’s drought, which depleted forage stocks.

No longer able to depend on their rangeland for forage, the family had to find creative ways to feed. They chopped failed crop acres for silage and work closely with their nutritionist to develop new rations.

John was forced to sell 200 cows and cow/calf pairs.

In addition to working with Tyler, Cam works for the True Dakotan newspaper as a graphic designer as well as a freelancer, creating bull sale catalogs for other producers. The couple have a 3-year-old son, Lawson, and are expecting their second child in June.

John’s oldest daughter, NaLani, is involved in the cattle business full-time. She and her husband, Rick Dunsmore, raise registered Simmental just down the road from John. The couple have three children, NaLea, 14; Chase, 8; and Swayzee, 7.

Like Cam, NaLani shares their father’s passion for cattle. “I like cattle and have always enjoyed being around them and making breeding decisions. It’s always been an interest of mine, so I knew when I went to college I wanted to come back and have a cattle operation,” says NaLani, who, like her dad, went to AI school as a young teen.

Involved in every aspect of the family’s seedstock operation, the sisters say they learned a lot from John. “He taught us a good work ethic and has always encouraged us to make our own decisions and gave us a good perspective on how the world works,” Cam says.

Cam and NaLani’s youngest sister, Carly Christensen, lives in Sioux Falls where she works as a cosmetologist. The family lost the girls’ mom and John’s wife of 29 years, Peggy, to pancreatic cancer in 2012. A cattlewoman, Peggy is buried on the family’s ranch.

Until the 1950s, the Christensen family raised Herefords. They decided to introduce Shorthorns and Angus into their herd after a county agent encouraged Jens, to crossbreed to increase his cows’ milk supply. They began to explore other breeds and in the early ’70s they shifted toward a SimAngus™ program.

As their herd genetics improved, friends and neighbors took notice and started buying bulls from them. In 1978 the family held their first bull sale.

“I still remember that first sale. We had been selling to neighbors, relatives and friends privately for years. When the auction started, someone would bid and he would look at all his neighbors and relatives, and they would look at him and no one would bid against him,” recalls John. “There was this fellow from Iowa who showed up. He began to bid on the fourth bull that entered the ring. All the other guys looked at him and thought, ‘who is this?’ He broke the ice and got the bidding going.'”

Forty years later, the annual sale continues in a sale barn built on the ranch, and online.

John says Christensen Ranch seedstock remained relevant over the years because the family focuses on a wide range of maternal as well as carcass traits that work for commercial producers.

“We have identified some cow families that score high in marbling as well as cutability traits – and they are easy calvers,” he says.

Christensen Ranch customers hail from counties across South Dakota and states across the nation. Eighty-seven percent of buyers are repeat customers.

When John breeds for calving ease, he doesn’t focus on small birth weights, as he explains. “Calving easy takes a big pelvic area, and also a cow has to have a will to calve and a desire to calve.”

Based on research and experience, John further explains that calving ease is a trait with value beyond calving season. “It impacts the entire life of that calf. If there is an easy birth, the calf can nurse earlier and gets a good dose of colostrum – which is so important – the quicker the calf gets it, the healthier it is throughout its lifetime,” John says.

He explains that by the time a calf is 12 hours old, its stomach is less able to take in the antibodies provided by colostrum.

Cam adds that another reason commercial cattle producers buy Christensen Ranch bulls is the fact that they offer a large selection of uniform genetics.

“Compared to many bull sales, we sell a large number of paternal brothers and three-quarter brothers. Not a lot of breeders have 40 bulls to sell by one sire group,” Cam says.

Over the years, Christensen Ranch has produced bulls who became known across the industry, like Olie, known for a shorter than average, 270-day gestation. “At weaning you had so much more thick bodied and meaty calves,” NaLani says.

Although he’s approaching 65, John has no plans to retire. “Genetics still excite me. Not quite as much as they used to, but cattle are still my life – most days I eat breakfast and don’t get back to the house until evening. I’m out here with my cows.”