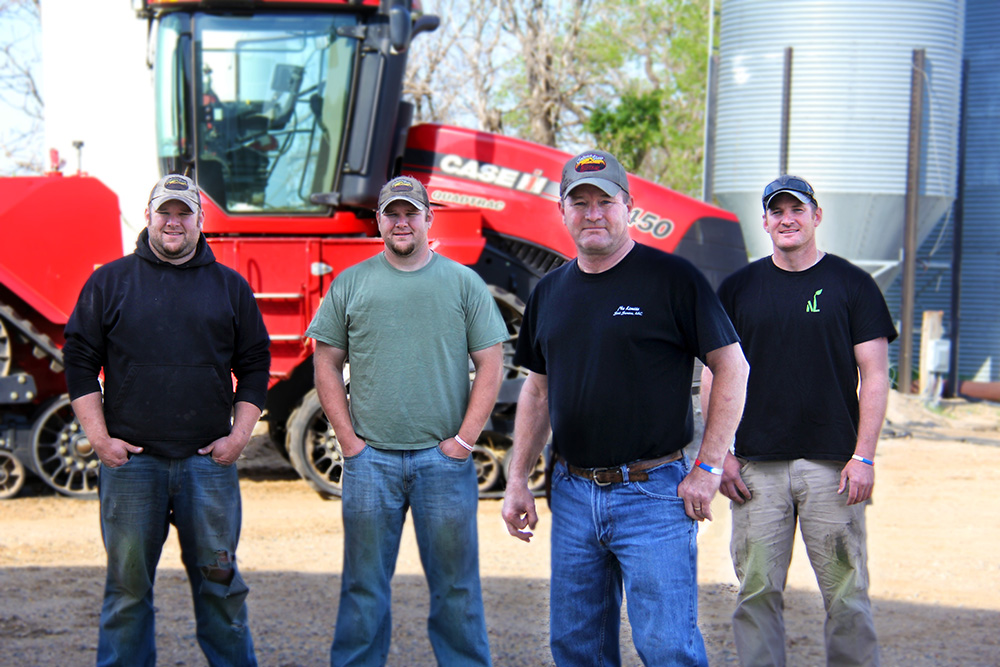 By Lura Roti, for SDFU; Photos by Kaylee Speck Photography

In 1978, when Doug Sombke made the decision to farm fulltime after high school, times were tough.

“To explain how broke we were, I tell people that when Mel and I got married we couldn¹t afford an oven. We cooked on a hotplate,” Sombke recalls.

But he was determined to make a go of it. Starting with 38 acres and the 4-H flock of 150 registered Suffolk ewes he and his brother, Dean, had built, Sombke stuck with it. He leased from neighbors, share cropped and eventually purchased land.

Along with sheep, the fourth generation Brown County farmer started a cow/calf herd and eventually expanded to operate a feedlot.

“Everything Mel and I earned went back into the farm.” Together the couple raised four, now grown children: Nikki, Brett, Bryan and Bryce.

Fast forward 20 years. Like their dad, as his sons grew into men, they wanted to return to the family farm. However, the now 2,300-acre farm was not large enough to support four families and land prices had escalated dramatically. So, Brett, 29, Bryan, 28, and Bryce, 28, began looking for innovative ways to supplement their farm income.

Today, along with farming, Brett is co-owner of No Limits Soil Services and Bryan and Bryce co-own Coteau View Hunt and Kennels.

Looking for a career path off the farm, Doug Sombke headed to college in 1978. However, only a few weeks into his freshman year, he was ready to pack up and head back to his family’s Conde farm.

“Sitting in class I began to think of how many heifers or ewes I could buy with the money I had just spent on books and college tuition,” explains Doug, 55, a fourth generation farmer.

Up to this point, he had seen college as a way to escape the farm. “It was hard work and there was little reward. Only a few weeks away from the farm, I could not wait to return.” Farming was hard work alright. And in 1978 a future in farming didn’t look bright, but Doug had discovered his calling and he was determined to make it work.

With 38 acres and a flock of 150 ewes he owned with his brother, Dean, Doug set about building his farming operation. He had support from his dad, Dallas, who let Doug use his machinery in exchange for labor. He sharecropped and leased ground from retiring neighbors. In time, those same neighbors sold him their land.

“It was a different time. My neighbors didn’t pit me against another neighbor or family member trying to get the best price; they felt fortunate to have someone farm their ground who they knew would take care of it,” Doug explains.

In one season he went from farming two quarters and 38 acres to four quarters. “That more than doubled my farm ground. It doesn’t sound like a lot today, but in those days of 12-foot drills, it was a lot,” he said.

Along with supportive neighbors, Doug found an ally in Farmers Union.

His dad was a lifetime member of Farmers Union and actively served on the board of several local cooperatives, so Doug was familiar with the organization.

However, it was not until he became concerned about packer consolidation and the resulting impact on local markets that he became involved.

“Farmers Union was lobbying on behalf of family farmers like me,” Doug explained. “This was about the same time that Sen. Johnson first introduced COOL (Country of Origin Labeling).” He attended a D.C. Fly-In. “I was impressed by how professionally the national staff handled themselves. I was also impressed by the respect the organization received from Congressional staff,” he says. “During the Fly-In, Farmers Union was determined to help us share our stories. I was able to share my family’s farm story, and Congressmen actually listened to me. That was a big deal.”

In 2005 he was elected to serve as President of the S.D. Farmers Union.

“Fortunately, I was asked to serve at the same time that my sons were home to help with farm work. I can focus my energies on carrying my neighbors’ concerns and the concerns of South Dakota’s farmers and ranchers to change policy and activate change,” Doug says. “I love helping people. My mom always said that helping people is either my passion or vice. I have always found great satisfaction in helping people get what they want.” Today, South Dakota Farmers Union takes second place only to Doug’s family.

“Farming is how I unwind these days,” says Doug, who starts most mornings before dawn reading online articles, blogs and newspapers to stay on top of issues impacting South Dakota’s family farmers, ranchers and rural communities.

“These are the people and issues that are important to me,” Doug says as he recalls a Tom Daschle quote:

“If I don’t do it, who will? If not now, when?” Family life In 1980, Doug and Mel married. The couple began dating in high school. Since the beginning, Mel worked off the farm as a postal clerk.

Today, she is Postmaster of the Groton Post Office. “Mel’s off-farm income was helpful, but the biggest reason she worked off the farm was healthcare. With four kids, that was a big deal – we needed to find a way to supplement healthcare costs.” Together they raised four children on the farm: Nikki, Brett, Bryan and Bryce.

“We all did chores together and hunted together,” says Bryan, 28, of the work and hobby that would bring him back to the family’s farm in ironically a similar way that his dad came home.

“I was pursuing a Business Economics degree and sitting in an accounting class one day when the department head walked in and encouraged all of us to change our majors because the job market was so bad,” Bryan says of the 2008 moment that motivated him to return to the farm fulltime.

“Bryce and I were just getting the dog kennel and lodge off the ground, so I saw college debt more as dead weight, when I could be investing that money into these businesses,” he explains.

Twins and now business partners, Bryce and Bryan had been trying to figure out a way to make returning to the farm feasible.

Doug suggested they look into building a hunting lodge and business around the wild pheasant population which already flourished on the farm.

Both Dallas and Doug were strong advocates for conservation and had been placing marginal production acres into Conservation Reserve Programs (CRP) for more than 20 years.

“We only hunt wild birds and they need plenty of cover to survive winter and have a successful hatch ­ without CRP and the food plots, we wouldn’t have pheasants,” Bryan says.

They converted a 1950s-era grain bin into a hunting lodge and began visiting sportsman shows across the U.S. to drum up business.

“You talk to thousands of hunters and maybe book 12 guys, but that’s what it took to get started,” Bryan says.

From there, word of mouth did the work for them. They haven’t attended a show for a few years now because each season they are booked – hosting about 80 hunters.

Doug helped his sons get started by loaning them the capital they needed.

“At 19 there wasn’t a bank that would loan us the money we needed. He believed in us,” Bryce says.

Along with the lodge, Bryce and Bryan raise pointing Labradors and train hunting dogs. “These are not flushing dogs. They will point a bird until you produce a bird and kill it,” Bryan explains.

Together they train about 20 dogs a year and sell about 50 puppies. To guarantee their puppies’ health, they have all breeding stock genetically tested before purchasing them. “These tests rule out things like hip and elbow dysplasia and eye issues ­ basically all inherited diseases,” Bryce explains.

Looking back on the history of their family farm, Doug says since the beginning breeding registered animals has been part of its legacy. “Great Grandpa Albert, who homesteaded this land, raised registered Percheron horses; my Grandpa, Alvin, raised Registered Hereford cattle and I raised registered Suffolk. Now my sons are raising registered Labradors.”

Growing up farming with his dad and brothers, Brett, 29, knew the value of soil sampling. As precision ag technologies took off across farm country, he noticed that the soil sampling process had become much more precise and time consuming. “Today, it takes a lot of time and technology, so agriculture cooperatives are looking for third parties to do the work,” explains Brett of the niche he and business partner, Austin Clark, fill with the soil sampling business they began five years ago.

“We are busy sampling from the time soybeans come off the field until the ground freezes.” Brett says the days become quite long ­ he works until dark and then heads home to help with harvest – but he says the business provides the supplemental income he needs to farm with his dad and brothers.

“Land today is so expensive that if you can’t pay for it up front, it’s difficult to make it work. Because we all wanted to return to the farm, we all had to find different avenues to make it work,” he explains. “I love the lifestyle farming provides. I like being my own boss and living out in the country.” The next generation Reflecting on the work it took to get their respective businesses off the ground, all three sons say timing was everything. When they started, grain markets were good.

“The farm was actually making enough that we would have been OK just farming, but we knew it wasn’t sustainable and eventually the markets would level off. I’m so thankful we were ready for it and our businesses were off the ground,” says Bryce.

In today’s markets, Bryce says if it weren’t for their off-farm income, the farm income would not be able to sustain four families.

Brett is married. He and his wife, Stephanie, have a baby son, Braxten, born this August. Stephanie works as a radiology technician at Avera St. Luke’s Hospital in Aberdeen.

Bryan is married. He and his wife, Whitney, have a baby daughter, Maryn, born this August.  Whitney works as a nurse at same day surgery at Avera St. Luke’s Hospital in Aberdeen.

Bryce’s girlfriend, Amber, is in her last year of veterinary school at Iowa State University.

Nikki has a daughter, Adeline, 5, and works as a radiology technician for Orthopedic Surgery Specialists and Avera in Aberdeen. She is currently pursuing a degree in MRI. Nikki has always helped out on the family farm and currently helps Bryce and Bryan by cleaning the lodge in between groups of guests.

“The boys have exceeded my expectations of the businesses that they have built,” Doug says. “I have said this to my sons and I truly believe it ­ a good life is not about the money you make. It’s about the place you live and doing what you like to do. If you love what you do, then it’s not work.”