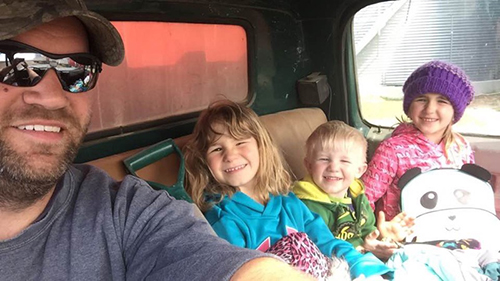 Seed cleaning has been a part of the Bisgard family farm operation since Herbert Bisgard constructed a cribbed elevator in the middle of the farmyard more than 60 years ago.

“We cleaned everything. Anything that was brought to us – flax, millet, oats, rye – in those days it was mostly small grains,” recalls his son, Peter Bisgard, 63, a third-generation Day County farmer who raises wheat, corn, soybeans and some registered seed with his sons and wife, Leah. The Bisgards also have a daughter, Stacy Anderson.

Remember, this was before the days of traited seed when most farmers harvested their own seed to plant the following year.

Today, Peter and his sons, Bob, 37, and Randy, 32, continue to clean seed for neighbors to supplement the farm’s income. But, like most things on their family’s farm, the seed cleaning business looks different than it did when Peter was a kid.

“Of course things have changed. Back then, most grain was brought in on 4-wheel trailers or pickup trucks. Today we only see semis,” Peter explains.

Technology and the weather have impacted the overall farming operation as well. In the 1990s, water began to take over farmground.

“We have a picture of Randy on a tractor and drill in a field where people now fish,” Peter says of Bitter Lake, a non-meandered body of water, which was farm and pastureland in the 1970s but today has recorded depths of 18-feet.

“In my farming career, I have lost more crops to water than drought, either not getting a crop in or seeing it drowned out,” Peter explains. “This is the Prairie Pothole Region, we don’t truly get rid of the water. We don’t have a downstream creek where it all flows. Even with tiling, it just puts the water in another corner of the field.”

“That is why we exited the cattle business – the water took over our feedlot and pastures,” Randy said.

The brothers sold their herd, using the profits to expand their farm acres. Randy also used the income to purchase a semi, launching Bisgard Trucking as another supplemental income. Bob also works off the farm as an agronomist for Farm Country Co-op.

Even with moisture challenges, the family’s passion for farming remains strong.

“It’s very disappointing, but you can’t let it consume you,” Peter said. “There are other farmers who have lost more land than we have.”

Leah adds, “Pete always says it’s every man’s dream.” She says that her sons have a similar perspective. “When Randy was growing up, he was outside helping whenever he could. Since he was small, if I was looking for him, I would always find his grandpa and there he was helping him fix a tractor.”

In fact, Randy’s infatuation with farming was such that Leah says he would do his homework on the bus ride home so he could get out and help once he got home.

In 2007, their uncle Bill passed away, giving the brothers an opportunity to begin farming together by renting acres from their aunt Rosanne. Today, the brothers are business partners. And, although they keep their farm finances separate from their parents, the entire family shares labor and equipment costs.

“It was an opportunity to farm and we jumped at it and didn’t look back,” says Bob, who pays an employee to fill in for him when he is working.

“It’s nice to not have to make decisions alone,” Randy adds.

With their combined experience, Bob says when he and Randy returned to farm after school, the farm was quick to welcome precision ag technology.

“We were the first ones around here to have autosteer,” Bob says. “I was using it at work and could see there are a lot of financial and conservation benefits to the technology because you are more precise, overlap is less – using less chemical and seed.”

Along with their uncle’s land, the brothers have expanded their farm acres as neighboring land, that was enrolled in Conservation Reserve Program (CRP) during the Farm Crisis of the 1980s, began to become available to rent or purchase. Peter says he had a similar opportunity to accumulate farmground when he began farming in 1972.

“A lot of land had been in a soil bank program and was coming available. There weren’t many who stayed home to farm, so I was share-renting several acres,” he says.

However, unlike their dad’s experience, where he was one of only a few farmers to return home, today, many of Bob and Randy’s peers also began farming in the early 2000s. “We have a coffee group and there are three father-son pairs who farm together,” Peter says.

“Every morning we have to get our coffee fix,” Randy explains. “We used to meet at a bachelor neighbor’s house every morning. We did that for more than 20 years, then he passed away, so now we meet at Egeland Church.”

More than a social habit, Peter adds that there are a lot of benefits to getting together with other farmers.

“When our neighbor passed away, there was about six weeks when we didn’t get together. We all realized that we also share a lot of information,” Peter says.

Outside of coffee, the Bisgards are actively involved in their community church and other Day County organizations. When their children were young, Leah served as a 4-H leader and has been on the Day County Fair board for more than two decades. Peter served on the Farm Service Agency committee for several years, and has served on his local cooperative board of directors since 1984.

“In small communities, getting involved is your social life. We have been on the recipient end of these organizations when we were younger. These are the organizations that provided us with services we needed – even today, organizations, like Farmers Union give us a voice,” Peter says, referencing the recent meandered waters discussion. “Also, we give back hoping that we are helping the next generation who are returning home.”