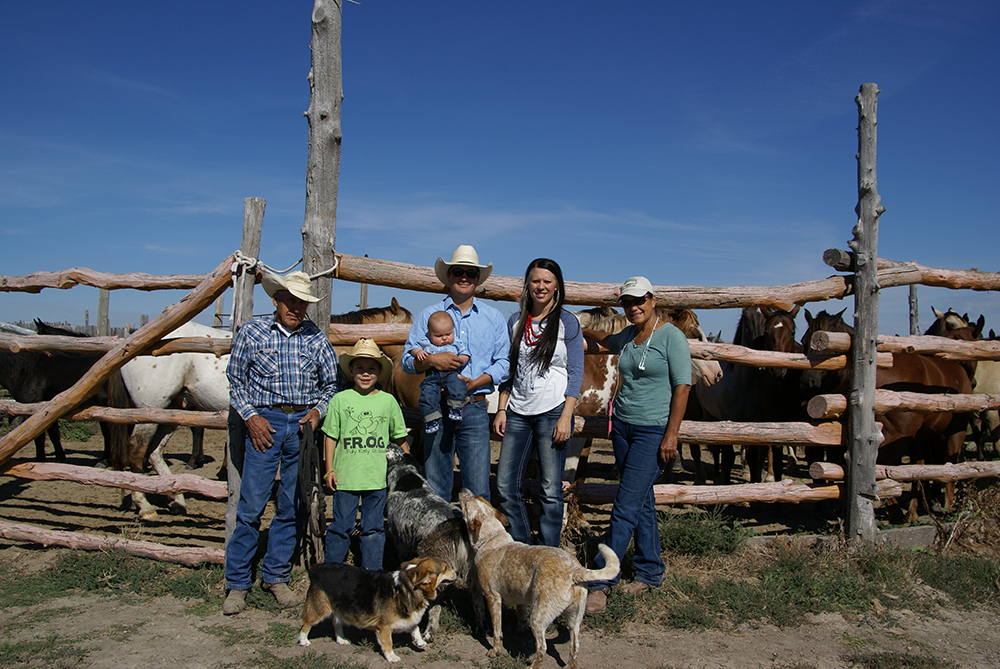 Traditionally, Lakota’s don’t have a background in farming or ranching, but they do have a strong heritage of cowboying and rodeo, explains Elsie Meeks, 62, who ranches on the Pine Ridge Indian Reservation with her husband, Jim, 71. “The Lakotas were a horse nation. Horses were essential to them. In the early days, many Native men got jobs as cowboys working for the big Texas ranching outfits who would run cattle on the Reservation land.”

Elsie and Jim continue the legacy. As members of the Oglala Sioux Tribe, they both grew up training horses and enjoying the sport of rodeo.

“On the Pine Ridge Indian Reservation, riding horses was our main entertainment and transportation,” explains Jim, who spent his first career working as a cowboy for area ranchers and rodeoing. “It was a challenge to ride a rough horse, and I was pretty good at it, so rodeo was a natural fit for me.”

Jim says the rodeo achievement he is most proud of is winning the bronc riding competition at the 1980 Cheyenne Frontier Days Rodeo.

Although Elsie had seen Jim at local rodeos on the Pine Ridge Reservation while she was growing up, they actually met in Riverton, Wyo. when Jim came to put a bid in on producing a rodeo. A few years before they married, Jim reclaimed the 320 acres allocated to his family in the 1930s and began pursuing his dream of raising his own cattle on the land which had been leased to non-tribal members.

Starting out wasn’t easy. Although they could lease tribal land to run livestock , they had limited access to capital making it difficult to purchase cattle. “Financing for tribal members has been hard to come by,” says Elsie, explaining the round-about way the couple built up capital to start their beef herd was by providing roping cattle and rough stock  to rodeos. “The rodeo business isn’t hugely profitable, but it’s the way we got started. We could borrow enough for 20-head of roping heifers, which didn’t cost  much in those days, and then had to pay the loan off completely within a year so we could buy another 20,” Elsie recalls.

Since the beginning Elsie has worked off the ranch. Her career path led her in a direction which not only helped the couple expand their ranch, but also improved lending and business development opportunities to tribal members.

In 1985 she was among a group of tribal members who helped launch Lakota Funds, a small business and microenterprise development loan fund which eventually spawned a credit union.

Beginning in an office manager position with Lakota Funds, Elsie realized that she had a knack for management and finances. She spent the next 25 years in Native community and economic development, eventually serving as President/CEO of First Nations Oweesta Corporation, a national organization which helps tribes and Native communities nationwide start community development financial institutions like Lakota Funds.

In 2009, the Obama Administration named Elsie State Director of the USDA Rural

Development in South Dakota. Until she retired from this role in 2015, she coordinated the efforts of 72 employees to provide resources from 40-plus programs to serve rural South Dakota residents.

“When you grow up on this reservation on a small ranch like I did, you don’t know your potential until you put it to the test. Success in each role gave me a lot of confidence to do the next thing,” Elsie says.

Because of her efforts and the efforts of those she worked with, today Lakota Funds has provided more than 1,000 loans to tribal members totaling more than $7 million.

“In the past, the Federal Government’s solution to economic development on reservations was to bring in outside interests to start factories to employ tribal members. This didn’t do anything to help the people. We knew an inside-out approach would work better,” she explains.

In addition to ranching,  Jim has served on the Oglala Sioux Tribal Council for 14 of the past 18 years.

“Really, my career began as a way to survive on this ranch. My heart and soul are with the land – this ranch and being around horses and cattle,” Elsie says.

The ranch land which stole her heart is breathtaking with its rolling hills of native grassland. Creeks run through all but two pastures.

“We love this land,” Jim says. “It was tough going, but I’m stubborn. I really wanted to build something for my kids – not to mention I’m not really suited for anything else, so I had to make this ranch work.”

As their rough stock string and business grew, so did their ranch and cow/calf herd. In the 1990s a few of their bulls competed at the National Finals Rodeo and the Meeks were in a place financially where they could turn their focus to building their cow/calf herd. They still raise  bucking bulls and horses. Today, only about 10 longhorns remain in their cattle herd.  However, their 12,000 acres of rangeland is dotted with 450-head of Black Angus.

“It makes us feel good that we’ve been able to hang in there and build something for our kids so they won’t have to work as hard as we did,” Elsie says. “When we say we started this ranch from scratch, we are serious. When Jim moved onto this land, all he had was a trailer with no running water. We built everything ourselves – the barn, the corrals – everything.”

Today their son, Luke Meeks, his wife, Kelsie, and their grandson, Narley, live and work on the ranch with Jim and Elsie. Several of their other children (sons Jeremy and Justin and daughter, Dwan)  run cattle on the ranch as well. Together, the Meeks have seven grown children and twelve grandchildren.