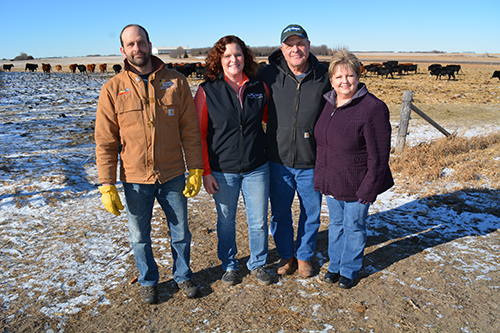 It was on this 1,200-acre McPherson County farm that a strong desire to work on the land and care for livestock was instilled in Dennis.

“My passion and my love has always, absolutely been with the cattle and the land and the machinery. That is where my entire energies have always been focused,” he says.

Although the only career Dennis ever wanted was to be a farmer, when he graduated from high school, the family farm was too small. His dad was young yet and had a large family to support. “So, I moved to Aberdeen and began working for Dakota Farmer magazine and hated it – absolutely despised it,” Dennis says.

To emphasize how farmsick he was, Dennis tells this story. “It was summer. I would lay in our small apartment with the windows open to catch a breeze and I would smell alfalfa and I would go wacko, absolutely wacko.”

Because he couldn’t change circumstances and he had a young family to support, instead of farming fulltime, at 21, Dennis joined the Aberdeen City Fire Department and built up a cow/calf herd as time, income and opportunity allowed.

“I bought about 20 heifers at the sale barn and kept them at the kids’ grandpa’s farm. Then, we bought some 4-H heifers for the kids to show in 4-H and I rented some land and took a guy’s cows on shares and kept a few of those heifer calves,” explains Dennis, of the slow-but-sure way he built up the cow/calf herd to today’s 180-head that he runs together with his son, Jason and daughter, Rebecca’s cows.

To have enough pasture and hay ground, Dennis rented or purchased small pieces of land close to Aberdeen. Then, in the mid-’70s, 40 acres of land just five miles from Aberdeen came up for sale. Dennis sold a duplex he had renovated and built a house and barn. He finally had his farm.

“To be a farmer was just part of my calling. I never considered it wouldn’t work out. More than anything, when I finally got this place, I felt blessed,” he says of the home farmstead he shares with his wife, Rae.

All the while Dennis was building up his farm, he worked fulltime as a firefighter. “I couldn’t have done it without Rebecca and Jason,” he says. He explains that although the 24-hour shifts were long, they allowed for him to have large chunks of time off to accomplish farm work. However, when it came to daily feeding chores and calving season, he relied heavily on his children.

“I remember checking cows in the middle of the night when Dad was at the fire station and, if there were any problems, I’d call dad and he’d come home,” says his daughter, Rebecca Rink.

Rink says the independence and problem solving she gained working with livestock serves her well as a large and small animal veterinarian. She says growing up with livestock in a rural state gave her an edge when she applied for vet school at University of California, Davis.

“There were somewhere between 500 and 600 applicants for 120 positions and I pulled an interview. I was different from the other kids they interviewed because I was a South Dakota kid who understood food animals,” Rink says.

“I always liked working outside with dad and the livestock. I remember being around 5 and dad was castrating calves and I was helping, picking up the nuts and putting them in a bucket,” says Rink.

“His mom would drop him off at the babysitter around 8:15 and I’d get a phone call to pick him up a few minutes later because he wanted to be outside with me,” Dennis says.

Today, Jason, works full-time managing the family’s cattle and forage acres. Like his dad, he got his start working full-time off the farm. Jason spent the first 20 years after college working for beverage distributors in Aberdeen and farming on the side.

“I always wanted to farm full-time. I enjoy trying to improve the product and the new life, making the next generation of calves better and seeing the new life,” explains Jason.

Jason makes most of the breeding decisions for the family’s herd. He manages an essentially closed herd and improves herd’s genetics by retaining heifers and buying bulls with a balance of maternal and carcass characteristics.

The farm Dennis grew up on was just a little over a mile away from where his grandpa homesteaded in 1892. His grandpa’s family were German farmers, who emigrated to South Dakota.

Along with farming, Dennis says his dad also passed on a desire to serve the community. His dad was a McPherson County Commissioner for 16 years and worked as McPherson County Highway Superintendent for nearly a decade.

“My dad had a passion for roads. That was his Sunday afternoon pastime. We didn’t fish or hunt, we drove roads and pastures,” Dennis says.

This odd pastime makes sense when Dennis explains that as a kid, there wasn’t a road leading to their farm. “We had to go out across the prairie. So, my dad was involved in getting roads throughout rural McPherson County. During his years as commissioner, they moved a lot of dirt,” Dennis explains.

Accountability, not roads, is what motivated Dennis to run for Brown County Commission.

It all began when he kept Jason home from school one day to attend a Brown County Commission meeting where the discussion was focused on a new building to be built on the fairgrounds. “There were all these old, gray-haired guys sitting in the Commission Chambers and they were intimidating. When we left, Jason began asking me questions and I could tell that he recognized the intimidation level and it bothered the ever-living dickens out of me,” says Dennis. “The County Commission Chamber does not belong to the County Commissioners, it’s the people’s chambers. The money we spend belongs to the taxpayers.”

Within the week, he stopped by the county auditor’s office to pick up the paperwork to petition to run for county commission. “The lady who handed me the paperwork began to cry because she didn’t think anyone young ever ran for office. I was 38 at the time,” Dennis, 69, explains.

It was 1986. Dennis ended up serving on the county commission for 20 years. In 2001, he was elected to serve as President of the South Dakota Association of County Commissioners. Dennis also spent eight years serving in the South Dakota Legislature.