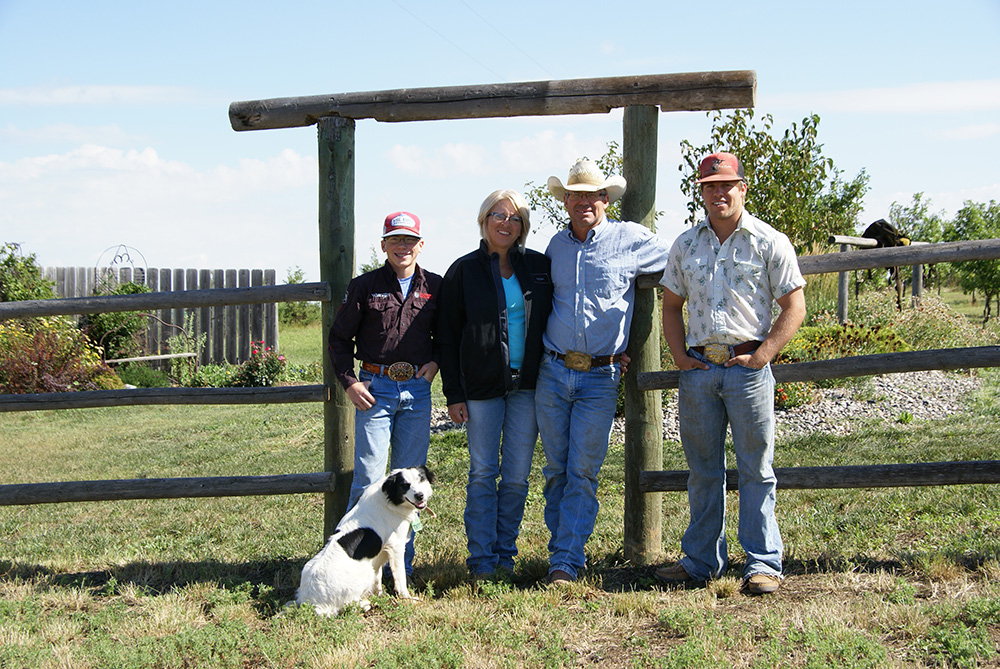 Middle of Nowhere might be the best way to describe the location of Pat and Barb Clark’s ranch, which is located on native rangeland 40 miles southeast of Lemmon and 30 miles east of Meadow.

Homesteaded in 1915 by his grandfather, Avery Clark, and great-uncle, Harry, the Clarks, along with their children, Tayte, 21; Trig, 19; Cassidy, 15; and Teigan, 14; raise cattle, hay and somehow make time for their hobby of rodeo.

“I tell people I love my job. Ranching is what I always wanted to do. It’s been my dream since I was a little kid,” Pat, 52, explains. “I’ve always enjoyed livestock and working with horses.”

When Pat Clark, 52, reflects on his life and career as a third-generation South Dakota rancher, he looks upward and gives thanks.

“I thank the Lord for the opportunity to ranch. He’s been good to us and if it was not for Him, we wouldn’t be here.” “When you talk about getting through the tough times ­ God is a key player,” adds Barb, Pat’s wife and ranching partner of 27 years.

In 1986, Pat met Barb, who grew up on a farm/ranch operation near Meadow.

The couple married in 1988 and have been ranching together ever since. In

2000 they purchased the ranch from Pat’s dad, James.

Together the couple and their four children have worked hard to make their cattle herd and land more productive. “We sell beef but we are really selling grass. We want to sell more pounds of beef per acre of grass,” Pat explains.

Since they took over ownership, they have installed water pipelines, cross fences and implemented a rotational grazing program.

“It’s changed quite a bit. The ranch was pretty Owestern’ with big open-country pastures,” says Pat, of 7,000-plus acre pastures the cattle freely grazed. Today, most of the pastures have been cross fenced by him and Barb into 320-acre pastures.

Although the couple has always been open to increasing efficiencies ­ attending land management workshops whenever they can ­ Barb says the biggest changes were driven by the 2002 drought. It was so dry that summer, Black Horse Creek, which runs through their property, ran dry and the water that was in their dams was not potable. “We had no hay so it was nip and tuck for a while. In the end we had to sell down our herd,” she says. “We realized the longer we could graze the rangeland, the less dependent on hay we could be.” They continue to install cross fence, drill wells and pipeline with assistance from Natural Resources Conservation Service (NRCS) Environmental Quality Incentive Programs (EQIP). “It’s truly a work in progress,” Barb explains.

Today their graze-half/leave-half program allows for a reserve of grass.

During the 2012 drought, the Clarks were able to maintain their herd size.

In order to transition what had primarily been a crossbred Gelbvieh herd to a Black Angus herd, the couple initially relied on AI. However, when the process became too labor-intensive, they decided to let bulls do the work.

Along with livestock, the couple has enjoyed raising their children on the ranch. And, due to its remote location, when the country school closed and they had to drive 30 miles to the nearest school, the Clarks began homeschooling. At the time, their oldest was entering the seventh grade.

Because she used to help Pat with ranch work full-time after the kids left for school, when Barb took on the role as her children’s teacher, the entire family had to change their schedule. “Things we would normally do in the morning, we would put off until the afternoon. Basically, we all had to change our mindset. To home school, you have to stay disciplined,” Barb says. “During the school year, we are inside doing school work in the mornings and go out to help Pat in the afternoons.” Although it took some getting used to, Barb and Pat say they wouldn’t change a thing. “We are thankful for the extra time we were able to spend together.

The older we get, the more we realize that life is fleeting,” Pat says.

When the family is together on the ranch in the summer, along with working together, they spend time traveling to rodeos and participating in 4-H activities.

“Growing up we lived so far out that we could not be involved in sports so mom and dad got us involved in 4-H,” Barb explains. “I embraced 4-H to its fullest, participating in public speaking, sewing, showing beef and static exhibits. As I got older, I saw how much 4-H taught me, as far as leadership and values, and I wanted a similar experience for our kids.” During rodeo weekends, the family helps organize church services. They line up a speaker and Pat picks up his guitar to accompany the singing. “We try to live by example,” Pat says. “Rodeoing together has been a great family time. We’ve been blessed with the fact that we get to spend time with the kids, teaching them about horsemanship ­ and we’ve met so many great people.” As their children graduate and leave the ranch, Pat and Barb aren’t concerned about a transition plan because most of their children share their passion for the land and livestock. This fall their youngest enters the eighth grade. Barb says as they become less busy with their kids’ activities, they plan to become more involved in Farmers Union, an organization they have been members of since the early 1990s.

“Life is about seasons. As this season ends, we will become more involved in Farmers Union and other agriculture organizations we belong to. We appreciate the battles Farmers Union has fought for ranch families like us,” she says.