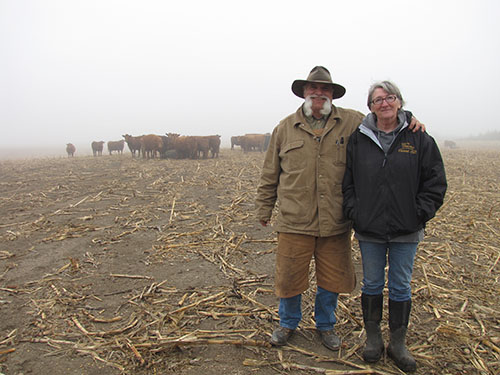 During a blizzard nearly 65 years ago, a neighbor knocked on Bill and Wanelda Martinmaas’ door. His wife was in labor and things were not going well. Bill started up his John Deere A and drove with his young wife the half mile to help.

On Bill’s way home, his tractor got stuck. It was dark. Driving wind mixed with snow made it impossible to see. Bill was lost.

“I had the young kids at home. I thought of those kids in the house and knew I needed to get home to them or they would freeze,” says Bill, who at 90, vividly recalls the story.

“Dad walked for quite a while, then he tripped over something. He realized he tripped over the top wire of a barbed wire fence and figured out where he was. He followed that fence and made it home,” says Ray, 67, Bill’s oldest son.

At the time, Ray was 3, his brother, Randy, was 2 and their sister, Sandy, was just a baby.

Today, standing outside the farmhouse Ray shares with his wife, Becky, father and son recall the early years.

Working alongside their parents, the Martinmaas kids grew up with a strong sense of family. They inherited Bill and Wanelda’s grit and a determination to make a living off the land against all odds.

“Everything was hard, but my parents were tough people,” Ray says. “We didn’t have much time to play. There were all these kids and all these chores. A lot of it fell to us older kids to raise the younger kids. When you are in a big family, that’s just what you do.”

He explains that when he and his brothers and sisters were in diapers, the family’s two-bedroom home didn’t have electricity or running water. His dad worked for neighboring farms to keep things going while he built up his own operation.

“He worked and she managed,” Ray says. “My mother was a real business person and a go-getter. She was the force behind my father. Whenever they could, they bought more land. They didn’t spend money on vehicles or vacations.”

Slowly but surely the crop acres increased and the livestock operation grew.

By the time Ray left South Dakota to serve in the Army, the family farm had expanded to include a cow/calf herd, hogs, chickens and a thriving dairy.

About a decade after they married, Bill and Wanelda built a six-bedroom home ­ complete with running water, electricity and two bathrooms.

“Working together, we ride the highs together with the lows.” Mike Martinmaas

“We grew up with farming and didn’t know anything else,” says Randy, 66.

Each brother owns his own land, livestock and some equipment. Through a partnership, the men share equipment and labor.

“It’s so we can all survive,” Ray says. “You can’t go out spend these huge sums of money for equipment ­ combines today are half a million dollars ­ so we each buy certain pieces of equipment and the corporation owns others we all can use.”

Like their dad, the brothers didn’t inherit their land. The men worked off the farm until they could purchase or lease land of their own.

“This way, I can keep track of them,” Becky says. “If they break out or cross a fence, I know which are mine.”

Randy raises crops and cattle with his son, Bill. “He and I have a good working relationship. They live on a place pretty near us, so we have a lot of little grandkids running around. It’s a pretty nice deal.”

Bill and his wife, Darci, have eight young children. “It’s great raising kids on the farm because you can send them out to play or ride in the tractor with Dad. They love everything about this life,” Darci says. “When I met Bill, I thought he was pretty hard core about this farm. Now, I see the same look in my 6-year-old Max’s eyes when he comes in from checking the cows during calving.”

Ray and Randy’s brother, Mike, runs a drug-free, dirt-raised, farrow-to-finish hog operation. “We weren’t a confinement hog operation before, so I decided if it was the same amount of work, then I might as well get paid more,” Mike says of the niche market which pays 100 percent more than selling them on the open market.

Their brother, Brad raises cattle and like Mike, he operates a drug-free, dirt-raised, farrow-to-finish hog operation.

For nearly 30 years, the six Martinmaas brothers worked together on neighboring farms. Then, on July 31, 2016 a farm accident claimed the lives of brothers Rick and Lonnie.

That Sunday, without telling anyone, Lonnie decided to repair the door to the lagoon pit under the dairy barn he and Rick managed together. While working on the door, Lonnie fell into the lagoon.

Rick found Lonnie. After pushing Lonnie out of the lagoon, Rick lost consciousness. Lonnie somehow radioed for help. Ray and Becky tried to pull Rick from the pit. It was an hour and a half before the men were rushed to the Faulkton Hospital. Lonnie passed away shortly after he arrived and Rick died six months later, never regaining consciousness.

Nothing can prepare a family for tragedy. Randy says the routine of their farm work has helped give them all something to focus on as they grieve.

“One day at a time. That’s how you get through something. We have to go on.”

It was also through farm work that the family’s friends and neighbors showed how much they cared. “One day eight combines showed up with grain carts. In a couple days they had the wheat harvest done. They wouldn’t take anything,” Ray recalls.

Time and again, throughout the fall, neighbors turned out to help with milking, chopping silage and corn harvest.

“We have that kind of support in the neighborhood here. We have wonderful neighbors,” Ray says.

For a time, the four remaining brothers tried to keep the dairy going, but the labor became too much. This winter they were able to sell their herd to another South Dakota dairy.

As they move into 2017 planting, the family agrees that together with the help of family, friends, the routine of farm work and clamor of rambunctious grandkids, they are healing.

“Our family knows how to pull together. When work needs to be done, it doesn’t matter whose it is or where you are, we pull together,” says Randy’s son, Bill.

Mean Woman Taxidermy was intended to be a hobby, but became a fulltime business Becky Martinmaas (pictured here) runs with her son, Josh Berg.

Commemorating a hunt can take years. Tired of waiting for their trophies, 10 years ago Becky Martinmaas decided to try her hand at taxidermy. She enrolled in Dave’s School of Taxidermy in Newburg, N.D. When she returned to the farm, she set right to work practicing what she learned.

What was intended to be a hobby became a full time business she runs with her son, Josh Berg.

“The first couple years were terrifying,” she admits. “You go to school and do one pheasant or deer head with someone looking over your shoulder. Then, I was home and doing it by myself. I have been blessed with so many friends and neighbors who allowed me touch their trophies when I was a rookie.”

Sitting at her workbench, leaning over a pheasant pelt, Becky is surrounded by a menagerie of mounted wildlife ­ proof that this taxidermist is no longer a rookie. A grizzly bear stands next to a coyote who is resting beside the head of an Australian water buffalo. The walls are covered with deer, antelope and pheasant trophies waiting to be picked up.