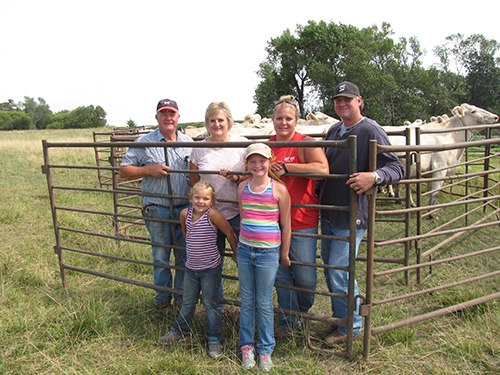 Emerging from the show ring with a big smile, first time 4-Her, Hadlee Holt, 9, was greeted by her parents, Corrie “Vedvei” and DJ Holt, with a big hug and sighs of relief.

“It was nerve-racking to watch, but seeing that smile was priceless,” explains Corrie of watching her daughter show for the first time.

“When I look back and think about all the life lessons I learned growing up on the farm, showing cattle and working alongside my sisters to help my mom and dad ­ DJ and I want those same experiences for our girls,” Corrie says of daughters Hadlee, 9, Bentlee, 5, and Cambree, 1.

At 35, Corrie has not missed a single South Dakota State Fair. Her parents, Al and Deb “Wienk” Vedvei, recall bringing their firstborn to the state fair as a young baby ­ the family camping in a tent.

Today, they camp in air conditioned campers, which made Corrie’s decision to pack up her firstborn, Hadlee, and bring her to the State Fair four days after she was born, an easy one.

Today, the family is working cattle together on their farm near Lake Preston. Hadlee and Bentlee watch a safe distance from the chute.

“Helping on the farm is my happy place – working calves with my family is one of my favorite days of the year,” explains Corrie, who splits her time between the farm, a full-time career with Natural Resources Conservation Services (NRCS) as a Soil Technician and recently launching Ag Buddy, a publication all about agriculture for kids.

DJ works for Al full-time ­ a career he began a few months after meeting Corrie at a National Charolais Show in Texas. Corrie and DJ met in 2000 and married in January 2002.

“I’m grateful to Al for this opportunity to work with cattle full-time.

Without him, I wouldn’t be able to do this,” explains DJ, who grew up in Ozark, Arkansas.

Like Corrie, he spent his teen years showing registered Charolais cattle. “I moved here in January, so a lot of their friends gave me a hard time, asking why I’d move to South Dakota.”

“I remember the first week DJ was here; it was negative 20 outside and he was sitting across from dad at the kitchen table and asked, ‘Do we go out on days like today?’” Corrie remembers, laughing.

“This is how I’ve secured my legacy,” explains Al, a third generation Kingsbury County farmer and cattle producer. “It’s our opportunity to pass this operation down to the next generation. My legacy won’t be left by what I do or have done, but by what the next generation does on this farm ­ whether it’s with crops or cattle.”

Al added that he was given a similar opportunity by his father-in-law, Arnold Wienk, when he and Deb got married. “When we started dating Arnold offered me a summer job to work for him custom baling. I got paid $1 a bale.

It was the summer of ‘77 and I earned $5,000.” Al and Deb married in 1978 and moved into the farmhouse her great-grandparents, Art and Myrte Marquardt, built in 1919. At that time, the couple had 45 ewes from a flock Al had built up as 4-H and FFA projects and seven cows.

Having grown up together in the Lake Preston farming community, Al and Deb shared a similar affection for 4-H and showing cattle, but not for farm life.

“I’m almost embarrassed to tell this story because I know it will be in print, but I always told my friends, ‘I’m not marrying a farmer,’” Deb says.

She explains that growing up, the oldest of five girls on the farm in the 1970s ­ life wasn’t easy. “Our family went through some really tough times. I always thought, ‘There has got to be an easier way. In farming the hours are long and so much is out of your control ­ you rely on the prices and the weather.’”

Al understood her concerns, but because he felt called to farm, he asked Deb to give him five years. “He said, ‘If we are still in debt five years from now, we’ll do something else.’ Famous last words! 38 years later, we still have debt, but this has turned into an awesome place to raise my kids and now, our grandkids. I wouldn’t change a thing,”’ says Deb, who spends most weekdays watching at least two of her seven grandchildren.

Except for the first few years of their marriage, Deb has worked right alongside Al. “After our second daughter was born, we decided instead of paying for childcare, with my knowledge and experience, I was more valuable helping here,” she explains.

Although Stacie lives in Gerogia, she stays involved with the farm by helping Deb with the record keeping.

As Al became more involved with Wienk Charolais, he received heifers as payment. By the time Al’s dad, Alec, was ready to retire and hand over the Vedvei farm to Al and his brother, Charlie, Al and Deb had grown their herd of registered Charolais to 45.

Some of the land Al and his brother, Charlie, farm has been in his family since his grandfather, Sam Vedvei, farmed.  He emigrated from Norway to Kingsbury County.

Together with his wife, Andrina, also an immigrant from Norway, Sam farmed two quarters of land and operated what was then a typical South Dakota farm with milk cows, beef cattle, chickens, hogs and sheep.

In the 1930s Sam earned enough to keep his land by working for the WPA building roads with the help from his team of horses.

Until Al was 5, his dad was a fuel delivery man for Farmers Union Oil Company in Lake Preston – the cooperative that is today Prairie Ag Partners.

Alec saved up enough to purchase some farm ground in 1962 northeast of Lake Preston.

“When my parents moved onto that farm there was electricity, but no running water and no indoor plumbing,” recalls Al, explaining that his parents and their four young children would live without these modern conveniences until Alec and Helen built a new home in 1970.

Over the years Al and Deb have purchased and leased crop and pastureland while at the same time building up their herd of registered Charolais.

“We have chosen to sell our bulls by private treaty. We feel we get to know our customers and their needs better this way.  However, we have sold females by video auction,” Al said.

Along with focusing on economically relevant traits, the Vedveis only keep docile cows. “Anything with a little bit of attitude we get rid of,” says Al. “I’m too old to get hurt and too young to die.”

“And now with the girls helping out,” explains Corrie, “We have no tolerance.”

Vedvei genetics and cattle can be found coast-to-coast, in Canada and Mexico. Semen is sold all over the world. “We have customers from Australia, Mexico, and other countries,” Al says. “Charolais cattle are excellent crossed with English breeds and are mostly used as a terminal cross.”

Over the years, the Vedveis have also implemented conservation practices throughout their land. They’ve planted shelter belts, plant wildlife food plots annually and implemented rotational grazing in their pastures.

“Most pastures are about 20 acres in size; we leave the cattle in there for a week and off for three weeks. The biggest thing we focus on is keeping new vegetative growth going at all times so we don’t stunt or hurt the grass,” Al explains.

Watching the family work cattle on a remarkably cool August day, it’s clear that this family enjoys spending time together. And that goes for extended family as well. Deb’s parents, Arnold and Carol Wienk, live only 1 mile from their farm and two of Deb’s sisters live close by.

Every Sunday, from Memorial Day until the start of State Fair, everyone who can gathers on Lake Poinsett at a lake cabin Deb’s great-grandparents bought in the 1950s.

“We will have anywhere from 20 to 40 family members show up, so it’s bring something to grill and a dish to pass,” explains Deb.

“I grew up with my cousins ­we had built in friends before we even started school,” Corrie explains. “I loved it – I still do.” The family also gets together with Al’s side of the family when possible.

We spent many summer days on the river in Pierre water skiing and tubing with those cousins as well.

Giving back to the Lake Preston community, as well as the greater community found within the Charolais breed association and South Dakota’s agriculture industry, is as much a part of daily life for the Vedvei and Holt family as chores.

“When I was growing up, so many people and local businesses supported me,” says Al, who served as the 1976-1977 State FFA President and has served as President of the American International Charolais Association.

Al was appointed by Governors Rounds and Daugaard to serve on the South Dakota Conservation Commission. He is currently a Director for East River Electric, has served on the Kingsbury Electric board for 16 years and is finishing out his third year as a board member for Prairie Ag Cooperative.

Al has served on the Kingsbury County Conservation District, and he is a founding member of the Lake Preston Higher Education Foundation.

Launched in 1999, the Lake Preston Higher Education Foundation provides scholarships to all Lake Preston graduates. The scholarship dollars are given when the students start their second year of post-high school education.

“We started with nothing but an idea. Our first scholarships were $50 book grants. This year, every student who graduates from Lake Preston High School will receive a $1,000 scholarship ­ it doesn’t matter what their GPA is or what they were involved in ­ and we don’t make them write an essay,” Al explains. “We’ve found that this is a good investment, as many of those youth have returned to the community or have been eager to give back to the Foundation.”

As a teen, Deb was a member of the American International Junior Charolais Association, the same organization that Corrie and DJ served as officers for. Today, Deb serves as Treasurer of the South Dakota Charolais Breeders Association ­ an office she has held for 33 years.

Together, Al, DJ and Corrie referee area junior high basketball games. “We all enjoy working with the kids and love the game.  While being the referee, we can still help teach these kids sportsmanship, teamwork and help build their confidence,” Corrie says.

“Being involved is just something we’ve always done. When we were young we learned a lot of life lessons from 4-H and sports involvement and it taught our kids responsibility,” Deb says. “It really broadened Al and my horizons and it did the same for our girls.”