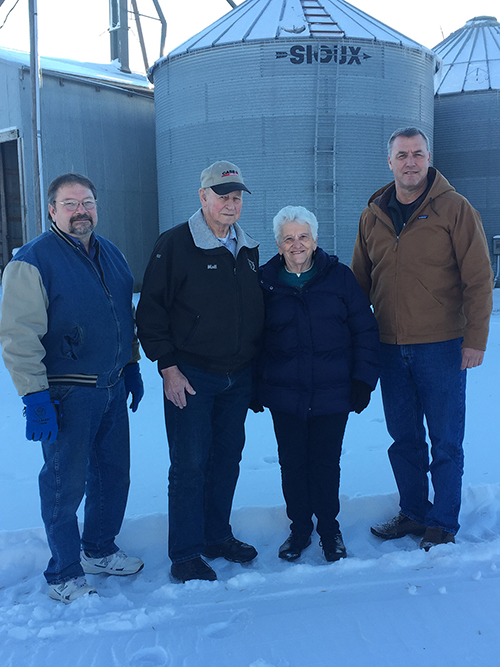 Like most South Dakota farm families 50 years ago, the Birgen’s farm resembled that of the Old McDonald nursery rhyme.

“We raised cattle, chickens, sheep, had milk cows and stock cows ­ but back then, everyone did. You sold cream and eggs,” recalls Matt Birgen, an 86-year-old Korean War Veteran, who together with his wife, Maureen, farmed and raised their seven children on the land he bought near Beresford with combat pay in 1955.

“It was easy to raise the kids on the farm because you knew where they were and they were busy,” explains Maureen. “Most of the time they were not in trouble because they all worked on the farm. We had a big garden and milked a herd of cows.”

During the summer months, the Birgen kids would herd their dairy cows home for milking on bicycle. Each morning after milking, the cows were turned out to graze about 2 miles of ditches which lined the gravel road near their farm.

“The neighbors asked us to keep fencing the ditches because the cows kept the weeds down,” explains Matt, who farmed land, his family has farmed since

1914 and Steve and Larry continue to farm today. “My mom lived along the road, and the kids would stop in at Grandma’s for cookies when they herded the cows home for milking. She loved it.”

This was the farming environment in which cousins Larry, 54, and Steve, 62, grew up and developed a keen passion for working on the land and raising crops.

Today, the men farm just a half mile apart and share equipment and machinery.

“We are small farmers, so by helping each other we both benefit,” Steve says. “Because both of our wives have careers, it’s nice to know there is someone just a phone call or text away if we need help ­ whether it’s one of us breaking down or we need help moving a piece of equipment.”

A generation earlier, Steve’s dad, Felix, and Matt’s dad, Nick, not only shared labor and equipment, but ran a threshing business together. “You get the work done of three men when two work together well,” says Matt, who shared labor with neighbor and longtime friend, Marvin Andersen.

When Steve was only 6, Felix died in a farm accident. The youngest of seven, Steve was left to be raised by his sisters and oldest brother, Jerry, who at the time was 17, because his mom had passed away three years earlier of breast cancer. “My sister and I came really close to going to an orphanage, but since my oldest sister, Phillis, was 21, she could become our family’s guardian,” Steve explains.

“I was my brother’s right hand man. I grew up farming with him and didn’t think there was anything else I wanted to do,” says Steve. “In my life, I have had more fun working with family on the farm, riding racks, stacking hay and drinking hot water ­ these are some of my fondest memories.

Steves affection for farming is echoed by his cousin. “It’s all I ever knew or wanted to do,” says Larry, who returned to farm with his dad after attending South Dakota State University.

Sitting around Matt and Maureen’s kitchen table visiting about their families’ farms, Matt says he knew his youngest son would return home to farm after college.

“When he was at SDSU he called home all the time to ask how things were going here,” Matt says. “Farming is in his blood and he loves it.”

Although Steve and Larry would follow their fathers’ footsteps into farming, because of changing times and challenges facing agriculture in the 1980s, their journey would be quite different.

Both Steve and Larry spent their farming careers splitting time between raising crops and livestock and working off-farm jobs to supplement and, in some years, sustain their family’s farm legacy.

“In the 80s just about every producer worked off the farm,” explains Steve, who began his off-farm career working for Coils, pressure washer manufacturers. In 1992, while working fulltime on and off the farm, he started his own company, Dakota Coils, on his farm. In 1997, Steve had built Dakota Coils up to the point that he could be solely self-employed on the farm.

Larry’s off farm career has been diverse. He sold insurance, worked for the local farm supply store, area carpenters and as a Farm Service Agency field reporter. Since January 2010, he has served as a member of the State Farm Service Agency (FSA) Committee.

Appointed by President Obama to serve on the FSA Committee, Larry is one of five agriculture producers who oversee the implementation of farm programming in South Dakota. In this role, Larry ensures programming is implemented fairly. “We listen to appeals from farmers and ranchers if they are denied payments at the county level.”

Juggling multiple careers while farming may not have been easy but both men say they wouldn’t have done it any other way.

“It’s more stubbornness than anything. I have watched so many guys my age lose everything. The 80s were horrible. I wasn’t going to give up our family farm,” Steve explains. “And you have to remember, both of our wives have off-farm careers. If it wasn’t for them and their dedication to our family farms, I don’t know if we could have done it some years.”

Today, the Birgen’s farms require less manpower than they did when their dads farmed. Over time, enterprises that didn’t make sense or took more manpower than was available went by the wayside. Both men raise corn and soybeans.

Maureen explains that the transition began on their family farm, like most South Dakota farms, long before Larry took over.

“We had all the different livestock until it just didn’t make sense anymore,” Maureen adds. “For example, in the 70s we were feeding chickens corn that cost a couple dollars a bushel when eggs were only bringing 29 cents a dozen ­ so we just kept a few laying hens to provide eggs for our own family.”

Then, declining hog markets in the mid-80s put an end to Steve’s brother, Jerry’s farrow-to-finish. It wasn’t long after, and Jerry leased his land to pursue another career path. Larry and his dad milked until 1989 when Matt began gearing up to retire.

Although livestock was a part of both family farms for generations, both men prefer focusing on crops.

“It’s the excitement of seeing what will happen. With crops the progress from start to finish happens so fast,” Larry says.

“Every year is different. That’s what I like,” adds Steve.

Looking back on the 2015 growing season, they recount how the season began cold and dry. “We planted into dry dirt in April,” Larry said. “Then we had some timely rains. Then all the sudden, boom, the corn is taller than me and we ended up this year with the best yields I’ve ever had.”

In addition to work and farming, both men also continue a legacy of giving back. Steve served on the board of St. Teresa’s Catholic Church and is currently the President of St. Johns Cemetery Board and all three men have been active members of the local Knights of Columbus. “After my mom and dad died, I and my sisters and brother never missed a Mass, just to explain the role our church played in our lives,” Steve says.

Larry currently serves on the board of directors for Southeast Farmers Coop Elevator Board and Farmers Union Industries Board ­ a cooperative of businesses which helps fund the operations of five state Farmers Union organizations.

Larry says his desire to become involved stems from his dad. “My dad set the example to be involved. He served on the Farmers Union Industries board and several co-op boards,” Larry says. “The younger generation of farmers does not seem to have the loyalty anymore as people are chasing pennies and forget that in a cooperative they have ownership.”

“And I was involved because my dad was involved in co-ops,” adds Matt, who served on a regional dairy producers board of directors and on the board of two cooperatives. He retired from the Farmers Union Industries board the year Larry was asked to serve on the board.

When the Birgens look ahead to the future of their families’ farms, they are not certain what the transition plan will be.

Neither Steve nor Larry have children interested in returning to take over the farms. For the time being, they are both grateful to be able to continue their family’s farming legacy and do what they love. “I have the retirement job of farming that I like, so as long as I can still drive truck and tractor and have my health, I plan to continue farming,” Steve says.