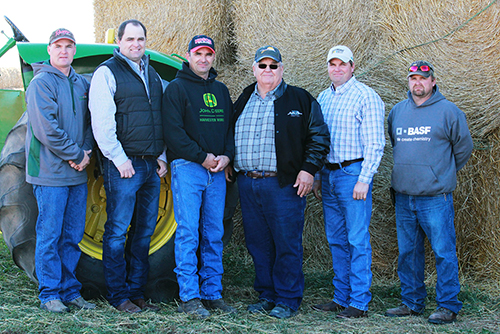 Communication can be a challenge when five brothers farm together. Sure, weekly meetings help, but what has been key to ensuring nothing falls through the cracks on the Sumption family farm is the daily meal they share together, explains Taylor, 40.

“When you get a lot of things going on and each of us going in a different direction, it really helps that we sit down together for lunch every day and figure things out,” says Taylor of the meal his mom, Margaret, fixes for the men in a kitchen they included in the plans of a machine shop they built in 2004.

Margaret enjoys the daily meal because it keeps her connected to her five sons and grandchildren. “I love to cook and I enjoy this because I keep up with my sons and get to know my grandchildren really well,” Margaret adds.

Although they turned the business over to their sons in 2000, both parents are still involved in the farm on a daily basis. Since retirement, John has traded roles with his sons. “I run for parts, run a grain cart or drive semi during harvest and do small projects that they need done. I love to weld and do wood working ­ I love farm work in general. Now that my sons have taken over, I don’t have to worry about the financial end of things.” John got his start when a neighbor he had worked for growing up sold him his 480-acre farm, contract for deed. He was 17. “I couldn’t sign for it until I was 18, but he was really good to me and let me start making payments.” It was 1966 and John paid $48,000. As he paid his farm off, John farmed with his dad, Raymond, and brothers.

“We had laying hens, pigs, geese and cattle ­ that’s how most every farm was in those days,” John says.

Today, the Sumptions’ farm land is a mile from the land their great-great-grandfather homesteaded in 1881.

When it was time for him to take a step back from the operation, John gladly stepped aside and let his sons take over. “I’m blessed to have a dad like him. Not many dads could step aside and hand control over to their sons,” Chris explains. “I had friends whose dads controlled them like a hired man.

My dad is total opposite. It wasn’t easy for him. We could see that, but he let us make mistakes and learn.” The brothers raise corn, soybeans, cereal grains, wheat, oats and sunflowers, as well as a small registered herd and an 800-head commercial cow/calf herd and finishing operation.

“One of the biggest benefits of working together with my brothers is the fact that most times we know what each other are thinking,” Eric, 42, explains. “Together we can accomplish so much more than if we were farming alone.” When Eric and his brothers began returning home to farm in the 90s, there wasn’t enough land to support six families. So the men started custom farming for neighbors, raising hogs and building up their cattle operation.

“Many of the farmers we custom farmed for offered us their land when they were ready to sell,” Taylor explains. “That’s how we eventually built up our farm acres.” As the farm operation grew, so did the opportunity for each brother to specialize. Today the brothers are responsible for different aspects of the farm ­ gravitating to the areas that interest them most. They all work together during busy seasons – like calving, planting and harvest.

“With all of us brothers involved, it seems like very seldom do things get missed because someone always sees things differently than you do,” Eric says.

His brother, Warren, adds that the family farming lifestyle is what brought him home to raise a family. “This is a great place to teach our children a good work ethic ­ and there is always something they can be doing.” Taylor adds that because the local school runs on a 4-day week, the men often save bigger projects for Fridays so their children can be involved.

“The kids love helping out,” he explains. “It’s probably one of the most rewarding things about being a family farmer is watching the next generation take a foothold and contribute.” Cow/Calf to Finish To capture premiums and witness the results of their breeding program, Eric and Warren expanded what had been a traditional, commercial cow/calf operation to follow the calves through to harvest. They also run a small registered herd.

“We feel that by retaining ownership we can make a little more money and by selling on the grid, we take advantage of premiums,” explains Warren, 36.

The brothers AI all their cows. “Because we finish the cattle, we get to see if the breeding decisions helped or hindered things,” Warren says.

Eric adds that because they retain ownership, they also receive useful feedback following harvest which helps him improve his breeding program. “It helps us produce a consistent product,” he explains.

Never one to sit still, Eric says he enjoys spending his days focused on the cattle side of things. “Cattle are active and keep me moving. I am not much for sitting in a tractor hours on end.” Eric calls on his experience in all aspects of cattle production in his role as vice president of the Beef Industry Council. “When I go into these meetings, my number one goal is to promote the beef we raise in the best way that we can,” he says, of the organization which is responsible for allocating Checkoff dollars.

The Miracle of Planting a Seed

Driving a combine this harvest, Chris marveled at the simplicity of a plant’s lifecycle. “It’s a miracle of sorts. You plant something and a few months later, look at what you get out of that one seed. It’s so basic and simple, but the result is unbelievable.” This year the brothers planted corn, soybeans, sunflowers and oats. Adopters of precision ag technology for some time now, Taylor says in a year like this where commodity prices are down, it has helped them control input costs.

“I always liked doing agronomy work,” explains Taylor who left the farm for college, not planning to return.

“Once I was living in town, I realized I would rather live out in the country and farm,” he said.

Once in a while Taylor is reminded how much he enjoys working outside on the farm when he goes into town to meet with Farm Service Agency representatives or the tax accountant. “I’m a worrier and details guy, so I do the bookkeeping and manage the crop insurance,” he says. “The days that I’m in town, wearing a nice shirt and in an office building all day, I realize how glad I am that I chose farming over engineering so that I get to spend most of my days outside.” His brother, Mark, can relate. Mark, 41, returned to farm after receiving a plant science degree from South Dakota State University. In addition to helping manage the crop side of things, Mark handles the family’s grain and cattle marketing. “They have given me the green light to make most any of the day-to-day marketing decisions – unless it’s a big decision. But with cell phones these days, I can easily talk to everyone and make a decision.” Mark explains that for his family, diversification has been the best way to maximize production on their land and minimize risk.

“We have a lot of land that if we didn’t raise livestock, we wouldn’t be able to use it ­ the acres would go to waste,” Mark explains.

Mark and his wife, Michelle, have two daughters: Morgan, 9; and McKenna, 4.

Chris is married to Christina and they have four children: Stefani, 23; Brian, 21; Nathan, 20; and Zach, 16.  Chris’ son, Nathan, plans to return to the farm in 2016 as the sixth generation to farm the land near Frederick.

“I’m excited about the next generation returning to farm. It is a really big step and will take a lot of planning, but we’re all ready for this,” Warren says.