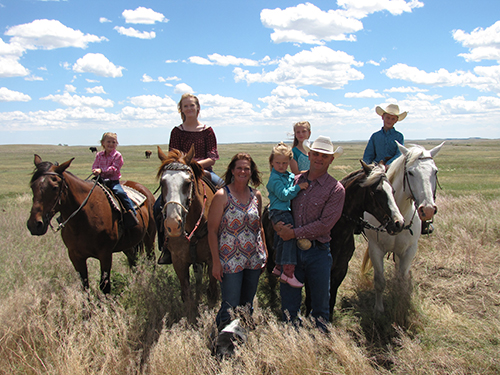 It’s a hot June day and Hope Schiley is on Chico, riding out past the tree belt. When her mom and dad drive out to check on their 5-year-old, she is smiling.

“Just this summer she really started to enjoy riding. It’s fun to see her confidence,” says Karin, a fourth-generation cattle producer, who like her husband, Roy John “R.J.,” has been riding horses since childhood.

Once Hope is safely home, Karin, 38, and R.J., 39, head out over the open range to check on a group of pairs grazing in a pasture nearby.

“The best part of the ranching lifestyle is your kids are always with you,” Karin says. “We do rotational grazing, so most days the kids and I will go out to check mineral and water or move the cattle from one pasture to the next.”

A few pasture gates later, the cows come into view.  Content, they barely acknowledge the pickup.

The bovines are clearly not concerned by the season-long drought which is top of mind for R.J. and Karin.

It rained last night. The couple hundredths of an inch of moisture was welcomed with optimism that more will follow.

“Water is the No. 1 thing,” R.J. explains. “When I planted crops this spring the soil was bone dry. It is hard to put those dollars-per-acre in dry ground. But, you always need to be optimistic. If we catch half an inch of rain at the right time – that may be all the crops need.”

“You have to have a little bit of faith,” Karin adds.

Optimistic and faithful, Karin and R.J. are also realists.

The couple explained that the 2017 drought has dictated several management changes.

Instead of turning their heifers out on grass, they have been feeding them in their backgrounding lot.

Then, to ensure rangeland health and avoid overgrazing the already drought-stressed forages, they have increased their rotation schedule – moving cattle every 10 to 12 days versus 12 to 16 days.

Making it on our own

Today, the couple rotates their black baldy cattle through 40 pastures on three ranches they manage within 20 miles of Meadow – a small ranching community boasting a bar and post office about 30 miles south of Lemmon.

To make rotational grazing possible, the Schileys began installing cross fence and water tanks when they returned to R.J.’s home community and purchased their ranch in 2006.

Within a decade, with the help of Environmental Quality Incentives Program (EQIP) dollars from Natural Resources Conservation Service, they have installed more than 10 miles of fencing, more than 40 water tanks and 5,000 trees.

“We could have invested in a new pickup, new equipment or a new house but that is all stuff and in the end, that will not matter as much as what we put back into the land,” R.J. says.

It’s a lot to manage. R.J., Karin and their kids work together to get it all done.

“When I was a kid, you could get on a horse and fence all day,” R.J. says. “To make it ranching today, you have to be willing to do four or five things each day. And have the skill set to not only run satellite monitors and auto steer but also be able to rope a calf.”

Today, he and Karin value the opportunity they have to work and raise their kids on the ranch.

“Raising our kids in agriculture, they grow up learning skills in all aspects of life. We’re teaching them that they can go anywhere from here – the ranch gives them a good base,” R.J. says.

Karin adds, “and, ranching teaches them responsibility. Just the other night, it was supper time, so I asked R.J. where Cash was. It turns out he was fixing fence. We didn’t ask him to, he just saw that there was fence that needed fixed and he went out and did it.”

“I don’t know of any 10-year-olds who live in town who have that kind of ambition,” R.J. adds.

Their kids also put their ranch skills to the test, showing cattle in 4-H and competing in 4-H rodeo and local playday rodeos.

“It’s a fun activity for the whole family,” Karin says of 4-H and rodeo. “I do make my kids do the 4-H public speaking as well.”

Raising kids, cattle and crops on the land was always R.J. and Karin’s plan.

After high school, R.J. went to Mitchell Technical Institute and graduated with a degree in powerline construction. He worked on the road for a little more than a year and then began working with Karin’s parents, Roger and Carol Simon, who farm near Tolstoy.

When Karin graduated from South Dakota State University with an agriculture journalism degree, the couple began building up a cattle herd together.

In 2006, they saw an opportunity to return to R.J.’s community when a ranch neighboring his dad’s came up for sale.

“A lot of old ranchers will tell you that if you have the opportunity to invest in land – do it. Don’t wait until you’re 40 or 50. Because land prices keep going up. And, there is only so much land in this world,” R.J. explains.

Getting started wasn’t easy. R.J.’s dad was clear, “If you are going to do it, you will do it on your own,” R.J. recalls. “And, the land we rented of dad’s was above county rent. That was the way it was. I’m proud of the fact that we did make it on our own.”

“I’m sure your dad thought eventually, he would give you his land, and until then, he wanted you to understand – this is what it takes to get there,” Karin adds.

Like this summer, Mother Nature wasn’t too cooperative that first summer either.

“Right after we moved our cattle out here, a lightening fire burned 90 percent of the fences and buildings and grass – basically everything but the house burned,” Karin says.

It was dry, they didn’t have any grass, so, they hauled their cows to pastures elsewhere, summering their cows nearly 300 miles away in pastures north of Aberdeen.

“That first summer we made a rent payment and a land payment,” R.J. says.

Determined, the couple decided to look at the fire as an opportunity. “We figured, if we are going to start over, we are going to build things the way we want things to be. So, we figured that out and got to work building,” R.J. explains.

Obviously, not afraid of hard work, R.J. and Karin are equally open to change.

“Change to us is a big factor, we never stop looking for new and better ways to do things. We don’t just do something because generations ahead of us did,” R.J. says.

They set aside time throughout the year to attend classes and field days. In addition to rotational grazing, the couple has implemented several other new management practices on their ranch – like cover crops.

When the couple learned about the benefits of cover crops from a meeting, they began to plant a cover crop mixture of peas, turnips and radishes following each small grain harvest to improve soil health and for additional forage. The resulting giant turnips got a lot of attention – from the cows, who would dig them up and eat them – as well as from the neighbors.

“I had an old rancher stop by and ask if he could pull one up. A few days later, I was in the feed store in Lemmon and there was the turnip,” R.J. says.

Backgrounding their own cattle is another break from tradition.

They started backgrounding their steers about 10 years ago. “We sold our calves at auction and we both felt like we were not paid for all the work we put into the calves. So, we discussed with each other and decided to background ourselves,” Karin explains. “We think we have a good product to sell and we don’t want to have the feeling that we are at the mercy of the day.”

The change has paid off.

“I feel like we have more negotiating power. We can say ‘yes’ or ‘no’ to an offer and we can always sell at the sale barn.

Over the years, the Schileys have built relationships with feedlot owners and cattle buyers.

“The main thing for us, is that even in bad years, we can still turn a small profit this way,” R.J. says.