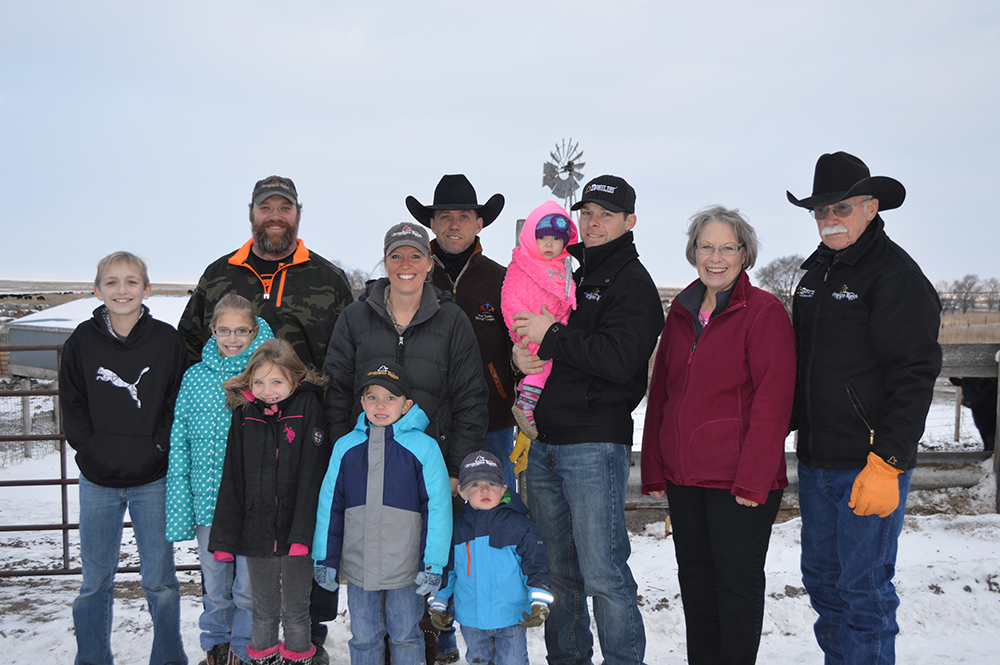 Ranch Family sees Past as Part of the Future

The Yost family of Gann Valley are dedicated to ranching for the long haul.

In hard times and good, four generations have pushed on, raising cattle and growing crops to sustain their herd.

Ben and Anastasia “Stacey” Knippling settled on the family ranch in 1930 with their only child, Paul. When Paul married Margaret Lobban in 1948, they built their home next to Paul’s parents and raised four children on the ranch. Paul and Margaret’s oldest daughter, Kathy, and her husband, Chuck Yost, joined the operation in 1973 and raised their five children on the ranch.

Now their boys ­ Charley, Wade and Rodney Yost ­ ranch with their parents and are looking forward to one day passing the land on to their children.

“In ranching, you get satisfaction in knowing you’re leaving something behind,’ Rodney said.

It’s not always easy. In the Dirty Thirties and the farm crisis of the 1980s, and more recently, during the Great Recession years, family members have made necessary sacrifices to keep the ranch running and thriving.

In the 1980s, some land purchased 10 years earlier needed to be sold, Kathy said. Chuck took day work and she got her degree in education so she could teach school. The couple’s daughters, Christie and Stacey, were top hands on the ranch until they married. They now ranch with their husbands. The boys all have outside incomes, but the land is “the heart of what it’s all about,” Rodney said.

Ben Knippling created the distinctive ax design that the family continues to use as their brand, and that is the reason the ranch is affectionately known as the Broadaxe Ranch.

Connected to the Land & Ranch Legacy

When Rodney Yost looks at fence lines his great-grandparents put down or the grove of trees his grandfather planted, he feels connected to the history of the land. “I feel an obligation as far as those that came before us,” he said. “I feel some sort of a responsibility to maintain it or try to improve it for their sake.” The family’s main business is a high quality commercial Angus cow/calf operation of about 700. They also sometimes do custom feeding for 100 to 200 cattle. In addition, they raise hay to feed the livestock, and some corn, soybeans and German millet. “We’ve been using the soybeans as a rotation crop,” Wade said, “but we’re looking at switching those acres, maybe to more feed or cover crop for fall grazing.” Wade’s grandfather, Paul Knippling, took an interest in rotational grazing and liked to experiment with theories. He received a South Dakota Range Manager of the Year award.

Wade, 38, went to Eastern Wyoming College for a farm and ranch management degree. “Pretty much all I ever wanted to do was ranch and rodeo,” he said.

He’s healed now from a broken leg he received July 2 while riding broncs.

Wade and his wife, Tara, have two boys: Sage, 5, and Kendyn, 2. Tara taught school until their youngest was born.

“We kind of made the decision that instead of her having to drive 80 miles a day to teach, it would make more sense for her to stay home and take care of our kids instead,” Wade said. Tara helps on the ranch whenever she can, and she babysits Rodney and Erin Yost’s daughter, Remington, who will be 1 in January.

When Wade and Tara’s boys are old enough, they’ll go to public school in Miller, which is 30 to 35 miles away. While Tara could homeschool, the couple feels public school will be good for the boys socially, as well as academically.

Charley Yost has three children: a son, 11, and girls, 9 and 7. They split their time with their mother in Chamberlain and with their father, who lives about 45 miles away. On days he has the kids, a cousin who works in Chamberlain drives them to school, or Charley drives the kids to the nearest bus stop, which is 20 miles from his house.

Charley said the Yosts have “friendly neighbors we trade work with throughout the year. In order to have enough people to work cattle efficiently, everybody just makes that happen together. It’s kind of a group effort as far as scheduling things, kind of the extended community family.” That cooperation includes not just carpooling, but ranch work such as branding calves, weaning and vaccinating cattle.

At Broadaxe, they brand cattle the old-fashioned way, roping the calves and dragging them to the fire, a way to pay homage to generations past.

With many family members pitching in, there might occasionally be a difference of opinion on how something should be done, but that’s just part of the process. “It forces you to kind of figure things out,” Rodney said.

“But if you’re all doing it for the benefit of the ranch S sometimes you have to just eat a slice of humble pie and go about your day.” “Our kids have all been vital to the ranch since they were young,” Kathy added. “We all worked together and they learned how to do all of the things that the adults were doing. As they went to college and got their degrees, they were always connected to the ranch, the livestock and the family’s ranch work.” Wade takes care of a lot of the cattle duties at Broadaxe. He also does the cattle pregnancy checking for the ranch, as well as for a few nearby ranches. The Yosts use artificial insemination on all their first-calf heifers. According to the family’s website, www.broadaxeranch.com, “by breeding good females, it also correlates to efficient cattle S and good breeding bulls S.” The family also rents additional land. “The land we’re able to lease makes a huge difference as far as what we’re able to do right now,” Wade said.

“I’ve always been interested in the livestock and the horses and the lifestyle,” Wade said. “It’s not an easy life, but if you enjoy what you’re doing, it makes it worthwhile. And the family part ­ to have your family here, is a huge part for me.” Rodney, 31, is full time on the ranch with Wade. Horses always have been part of ranch life, but Rodney took a special interest in them after college, forming an operation called Rodney Yost Horsemanship. He and Erin train and break horses, hold clinics and do horsemanship demonstrations, mostly for Quarterhorses.

“It’s a pretty thriving deal now, with great clients,” Rodney said. His main clientele in recent years have brought barrel racing prospects, and he also has a breeding operation. Erin is an ag loan officer for American Bank and Trust in Miller.

Charley, 40, is a nurse in Platte. He works six consecutive shifts, which allows him to be home at the ranch for a week at a time. Wade said that when Charley is home on the ranch, there are always projects ready for his other talents. “He is good at electrical stuff, plumbing, mechanics,” Wade said.

Charley calls the ranch “kind of my passion.” He enjoys working with the livestock and is grateful he can split his work between the ranch and nursing, which offers guaranteed income and benefits such as health insurance.

The Yosts became lifetime members of Farmers Union through its insurance.

“We were first insured with Farmers Union when Bob Wentzlaff was our agent.

His family lived in Miller,” Kathy said. “When Bob moved on, we continued with Farmers Union Insurance. Our agent was Leroy Person from Huron, and we continue with his son Troy Person and Person-Anderson Agency in Huron.” Kathy does the books for Broadaxe Ranch, and Chuck still is part of day-to-day operations, “but the fourth generation now shoulders most of the work and are ready to look to the future of the next generation,” Kathy said.

“That’s what we’d like to do, God willing; be able to go ahead and raise our kids here and let them choose, I guess. But if they’d like to live this lifestyle, to keep it available for them,” Wade said. “We’re darn sure not in control, so we’ll see what He has for us.” “For our family, ranching and family are a combined effort rather than separate objectives,” Kathy said. “We choose priorities in life, and for us, they are church, kids and grandkids, and our way of life ­ hanging onto history and building for the future.”