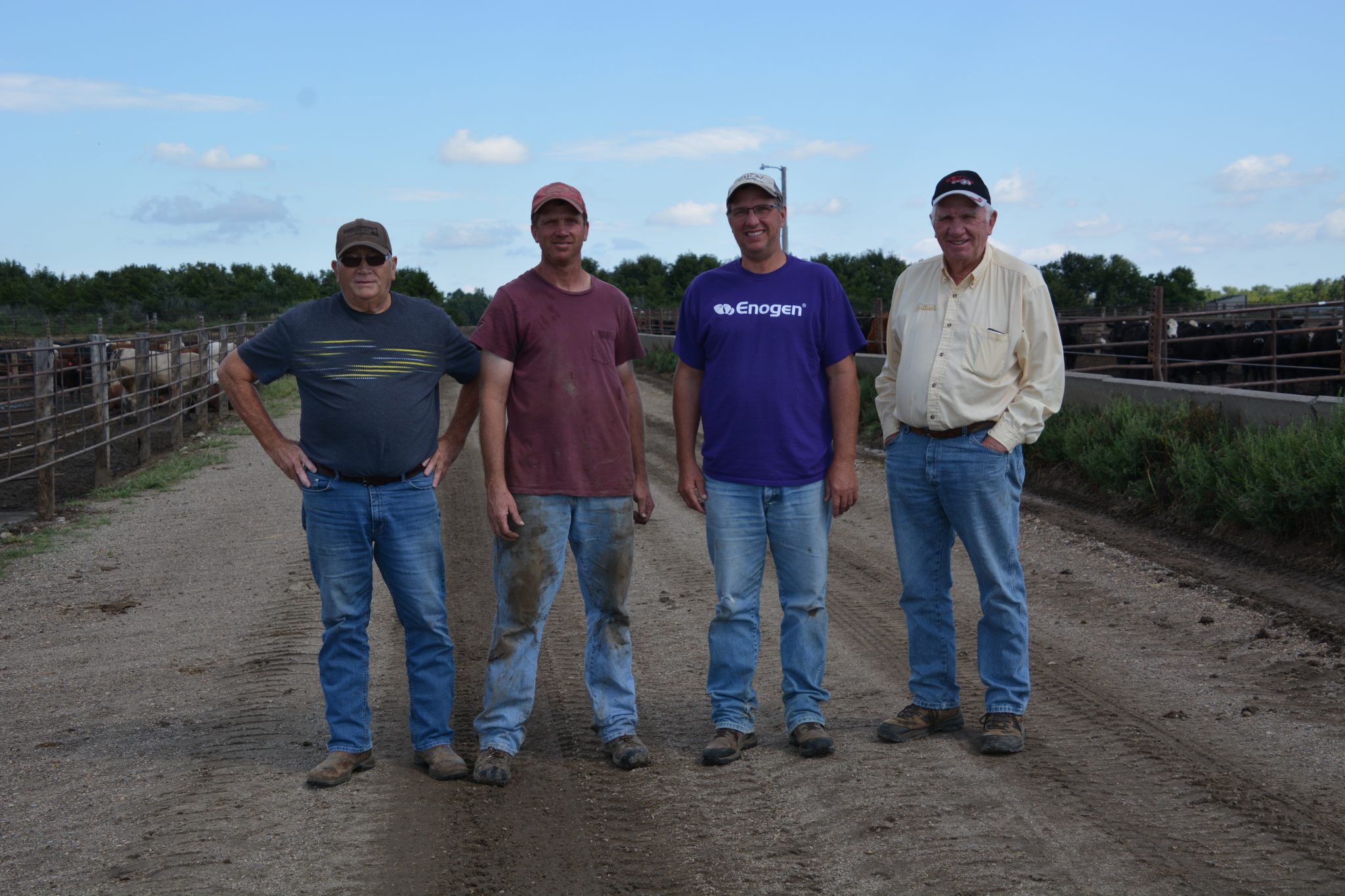 Being good neighbors is a way of life for brothers Jeff, 51, and Cory, 50, Burg. The fourth-generation Wessington Springs farmers collaborated with neighboring farmers to build a weigh station so they could purchase high moisture corn direct from other area farmers for cattle feed.

Together, these same neighbors purchase and share a silage cutter, sprayers and other farm equipment. “We get along with all our neighbors. And because most of us have similar farming operations, there’s good synergy in working together,” Jeff explains. “We can’t justify owning this equipment on our own, but together we are able to spread out the cost and appreciate using newer equipment.”

For the Burg family, being good neighbors extends to how they treat the land and its resources. Since 1995, when they expanded their cattle feedlot operation, they implemented a confined animal feeding operation nutrient management system which captures all manure and feedyard runoff in a lagoon to be applied to crop acres throughout the season.

Going beyond what is required by state law, the Burgs took their conservation efforts to the next level, uniting with other landowners in restoration efforts along the Firesteel Creek watershed. They converted cropland along the watershed back to native grasses and put up fences to keep cattle out of the riparian area. These efforts reduce field runoff from reaching the creek, which flows into Lake Mitchell.

“Farmers are the best stewards of our nation’s resources, if we won’t be good stewards, who will?” Cory explains.

“It’s always been our goal to leave things better than when we got it,” Jeff adds.

The brothers continue the land management efforts of their dad, Jim, and uncle, Quinten.

Along with resource preservation, the brothers began developing a farm transition plan early in their career. It has always been their focus to see the farm their grandpa purchased in 1907 remain in the Burg family. The Burgs have farmed in Jerauld County since 1883, when Jim’s great-grandpa, Andrew, homesteaded only two to three miles from where Firesteel Ranch is today.

Turns out keeping the farm has been a unique challenge for each generation of Burg farmers. Like many South Dakota farm families, the Burgs nearly lost their farm during the Depression. In 1933 Jim and Quinten’s grandpa, Chris, lost the farm to the county when he couldn’t pay taxes because the bank closed and he wasn’t able to access the money in his account.

To make matters worse, he and a few other successful farmers in the area had co-signed a loan so Lane Consolidated school district could build a new school. When the school district didn’t pay on the loan, the bank went to the farmers who signed the note. In a strange turn of events, “the family never moved off the farm and kept farming the land until Dad bought it back from the county in 1943,” Jim recalls. “There was sort of an unwritten agreement, that if you were trying to buy your own place back, no neighbor would bid against you. I’m always impressed by the tenacity and determination of my ancestors. So many just gave up and moved away.”

Unlike many who survived the Depression, Jim explains the experience didn’t scare his dad, Albert, away from using the farm’s equity to expand. “Every time he got ahead, he used his equity to get another piece of land – that is how we built the farm to where it is today.”

In the mid ’70s, Jim undertook the task of helping his parents put the farm into a corporation so that all siblings would receive an inheritance without dividing up the farmland. Once he and Quinten knew Jeff and Cory were interested in returning to the farm full-time after college, they began implementing a transition plan which was finalized in 2010.

“Our goal was to put the farm together enough so these guys could come back if they wanted to,” Jim explains. “There is no greater satisfaction than to see the kids want to do what we did. I always wanted to see all my kids get some inheritance and have the opportunity to put it to use before they were 80.”

The transition plan also includes Jim’s children who are not on the farm, Julie Bruckner, Casey Burg and Lisa Heiss, and provides for Jim and Quinten’s retirement.

“Jeff and Cory have made wise decisions and because of how this is structured, it allows a retirement income,” Quinten explains.

Prior to 2010, Jim had already begun to step away from the farm to serve as Public Utilities Commissioner for the State of South Dakota. Even with one less family member earning an income off the farm, Jeff and Cory knew they needed to expand. And due to high land prices, they didn’t see buying more cropland as the way to go. So, they expanded their feedlot.

“Growing vertically was what we needed to do,” Cory says. Jeff adds, “Finishing cattle allows us to sell our crops at retail prices instead of wholesale. And, it went hand-in-hand with the hay business we were already involved in.”

Quinten says he credits the farm’s success to the decision to expand the feedlot. “Livestock and farming work so well together.”

But they didn’t expand all at once. It began with getting permitted for 1,000 and then, 2,500 head. Today, the Firesteel Ranch is permitted to 5,000 head. “We don’t plunge in and do everything at once. We took calculated risks and expanded slowly, as we could afford to,” Jeff says.

Working with order buyers, the Burgs source most of their cattle from South Dakota. They are selective about herd health and keep performance records on all cattle they purchase. They have two employees and work with an independent feed consultant to develop their feed ration.

In addition to finishing cattle, they run a 250-head cow/calf herd. They calve half the herd in the spring and the other in the fall. “This allows us to utilize the bulls twice in one year and it’s a lot less labor calving in the fall – plus it gives us another pen of cattle for the feedlot,” Jeff says.

Over the years, each member of the family has made time off the farm to serve South Dakota. Jim served in the S.D. Army National Guard from 1965-1990 and served as a state representative from 1975-1985 and a state senator from 1985-1986. Quinten served as state representative from 1999-2010. Cory served 20 years in the S.D. Army National Guard, deploying to Iraq in 2004. And today, Jeff serves on the board of directors for S.D. Corn Growers and Farm Credit Services of America.

“One of the reasons I wanted to serve is we are in a farm crisis, and many young farmers were not around during our last crisis. These young guys have never seen bad times and don’t know how to deal. I want to help guide Farm Credit Services, so they have the right tools to equip them for this,” Jeff says.

Although he and Cory were young at the time, they remember the drought and financial struggles their dad and uncle faced during the ’70s and ’80s. “To me, the crisis of the ’80s was such an education. If you survived it, you were so much better for the experience,” Jeff says.

Looking to the future, Jeff and Cory do discuss transition plans, although they are unsure at this time if Jeff’s children will want to take over the farm. “This has been a family farm since it was homesteaded. It would be great to keep it in the family,” Cory says.