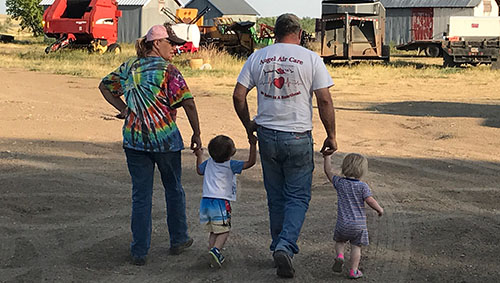 Someone once asked Darwin Latham’s grandpa Frank about his heritage. His answer? “Texan,” says the Camp Crook rancher.

As the story goes, Frank’s uncles, Doc and Willie, were among the area’s early settlers, first arriving in the 1880s, driving herds for Texas cattle companies.

They trailed up herds from Texas. “They worked for both the CY Cattle Company and the 101 Cattle Company,” Darwin explains. “Then they began ranching. For a time, Doc was part-owner of the famous bucking horse Tipperary.”

Born in Texas, Frank’s dad died when he was only 2, so his uncles, Doc and Willie encouraged his mom, Mattie, and stepdad, along with his younger brother John, to relocate from Texas.

It wasn’t easy. They tried homesteading several claims and moved around trying to make a go of it. After Frank’s stepdad’s death, Mattie and John moved to a small ranch just north of Camp Crook which is still in the family today.

Frank served in France during World War I as a truck driver. After the war, he put his heavy-equipment experience to work as a “cat skinner” driving a dozer helping build state highways. The money he earned helped him get a start ranching on his own.

In 1928, Frank and his young wife, Esther (Bickerdyke), started ranching on land north of Camp Crook along the Little Missouri River. Their oldest child, Erwin, Darwin’s dad, remained on the ranch.

“There are two stories about why we still have the place. One is we are too stubborn to give up and leave. The other is we were too broke to leave. Maybe the real truth is, it is a good place to be, so why go anywhere else,” Darwin says.

And, thanks to these efforts, Darwin, his wife, Kay, and their sons are the fifth generation of Lathams to ranch in the Camp Crook area. The family raises a commercial herd of black Angus/Hereford-cross cattle and sell some registered bulls.

Originally, like all their neighbors, the Lathams raised Hereford cattle. Then black became the preferred color and sale barn prices changed their allegiance.

“We’d get $50 less. Our cattle were the same weight and everything. It was their color, so we switched to black Angus bulls and put them on our Hereford cows,” Darwin explains.

Then, they noticed the bulls weren’t holding up. “They were overdeveloped and couldn’t make it on just grass. Their feet would go bad and they’d break down when we turned them out with the cows on the forest service allotment in the summer,” John explains.

As a result, John bought some registered Angus cows at a dispersion and began raising his own bulls. “We figured the bulls needed to be developed on the same feed as our cows – grass, hay and cake. That will allow them to develop slower but last longer and remain sound,” John says.

“We hand-feed the bull calves because we had some temperament issues with purchased bulls as well. Our main bull-feeding crew are Jason’s sons, my mom and my daughter,” John says.

To keep fresh genetics in the herd, John AI’s his registered cows and buys cleanup bulls. “I review catalogues extensively to get just what I’m looking for,” he explains.

In addition to temperament, strong maternal traits and feed efficiency top the list. “Fertility, moderate frame, weaning weights and growth round out the rest of the list,” Jason explains, their cattle need to gain well on rangeland as well as the forest service land they lease in the Custer National Forest.

Their focus has been working. For the last two decades, the Lathams have sold calves right off their ranch, direct to the same Sisseton feeder.

“He is very happy with how our calves perform for him, and we settle on a price ahead of time so we know there won’t be a market wreck on shipping day,” Darwin explains.

Like his grandfather, keeping things going for the next generation still takes gumption and creativity.

During the most recent drought, 2016- 17, the Lathams weren’t able to put up hay at home and lost some cattle to salinity poisoning when the water in their dams went bad.

Because access to water impacts pasture rotation, since 2003, the men have worked to install miles of waterlines, tanks and solar-pumped wells.

For the solar wells, the family was able to get some cost-sharing help from the Natural Resources Conservation Service, Environmental Quality Incentives Program funds and Emergency Conservation Program. The funds were made available during recent drought years when they had to haul water.

Even on overcast or snowy days, the solar-powered wells run continuously – keeping tanks thawed out on the coldest of days.

“They are easy to put in now, because we know what we’re doing,” Darwin explains.

Thankfully, there’s been plenty of moisture this year, “Our Little Missouri River is up longer than I’ve ever seen it in my lifetime. Typically, by this time of year you can walk across without getting your feet wet, but today, it’s 10-feet deep. The best clover year we’ve ever had.”

“And the cows and calves look much better,” says Jason.

The Lathams manage their summer pastures on a seasonal rotation. If they go into a pasture in the spring one year, they use it in the fall the next year. “It gives the cool- and warm-season grasses a break and as long as there’s moisture, it works pretty well,” Darwin says. “I can remember from an early age, my granddad Frank and dad told me, ‘if you take care of the ranch, it will take care of you.’”

Darwin’s focus on water began when he returned to ranch full time with his dad, Erwin, in 1994. He and his wife, Kay, had been working as teachers. They jumped at the opportunity to raise their sons on the ranch.

“We felt this was a great place to raise kids. You don’t have a lot of violence and crime here, not like a lot of places,” Darwin says.

The boys attended the multi-grade school in Camp Crook through the eighth grade. “I loved it,” says John, comparing it to the traditional elementary school experience he had prior to moving to the ranch. “You are with kids above and below you, so you learn a lot from your peers, and you get to help the younger kids. We all had combined recess and played kickball together. We even worked on subjects like history, social science and science projects together.”

“In a country school, you don’t have clicks because there are only about 20 kids in the whole school, so everyone needs to get along,” Jason adds.

Like their dad, John and Jason enjoyed working on the ranch and, after college they both planned to return home to ranch. The time was right in 2012. Darwin needed extra help because their grandpa Erwin was fighting cancer and wanted to stay on the ranch. “We were able to honor that and take care of him here,” Jason says.

Jason was the first to return home. He had and had been able to save up some money to build up the herd he began as an elementary student. Jason’s wife, Kaeloni, does billing and payroll for a local construction company. John, after teaching and coaching for several years, returned to the ranch in 2018 and works as a loan officer for Pioneer Bank.

Jason and John have slowly built their own commercial herd and were fortunate enough to recently buy some pasture close to the main ranch. Both men agree, having off-ranch income helps them survive the weather-related events as well as volatile markets.

While John got his first heifer calf from Grandpa Erwin, Jason actually received his first calf as part of a local program, established by Ludlow rancher, Claude Olson, to help kids get their start with cattle. Through the Olson Livestock Foundation, first-graders in Harding County can apply for a heifer calf. Then, three years later, they donate back one of her heifer calves.

The Olson Foundation is just one example of the strong community the Lathams belong to, and, yet another reason the men wanted to return to the ranch.

“We’re so sparsely populated, but because we only have one high school in Buffalo, we know people from all over Harding County – we have people who are good friends and we consider as neighbors even if they live 25 to 50 miles away,” Darwin says.

“In the spring and fall we do a lot of neighboring, trading work, branding and working cattle. There are about seven families in our crew who rotate around and help each other,” Jason explains.

Branding, the men explain, is a social event everyone looks forward to each spring. “After being cooped up all winter, it’s nice to get out and see people,” Jason says. “When you feel like you have had a crap winter, you hear about the one guy who buried his tractor in the snow and had to climb out his back window. It makes the day that you had all the pickups buried in the snow not seem quite so bad.”

Beyond the good times, community members watch out for one another in small ways, like delivering parts. “One challenge of living rural is the distances you have to go to get parts. Getting parts when you break down during haying can take one to four hours, depending on where you need to go for the part. At the Case-IH dealership 65 miles away there’s a sign on the counter asking in-store customers if they are from one of the towns listed, would they be willing to drop a part off for a neighbor in that community waiting for a part,” Darwin explains.

And in big ways. Darwin shares about a time a few years ago when an area ranch had a TB outbreak in their herd. “Everyone who shares a fenceline with them had to test. It happened right before calving season. It was a terrible deal. You don’t want to work cows before calving, but we had to. We had phone calls from our bankers, feed salesmen, insurance salesmen and others asking if they could come out and help us work cattle,” Darwin says. “Relationships you develop in agriculture are like nothing you can find in any other field.”

To give back, the Lathams are all actively involved in the community. Jason and Kay serve on the fair board, John and Jason serve on the church council, Darwin has served on the school board and is president of the EMT association. John currently serves on the Harding County Economic Development board and Jason has served as a director of Stockgrowers. Darwin, Kay and Jason are volunteer EMTs and John and Kaeloni are drivers for the Harding County Ambulance Service. ”We feel that part of leaving a legacy for your children and grandchildren is leaving not only a sustainable ranch, but a strong sustainable community. We have benefited from a great community and we want to give back and pay it forward to the next generations,” says Darwin.

“We have a lot of history here. I know it because I grew up with Granddad Frank, and although he wasn’t one of the first ones, he knew all the first ones,” Darwin explains. “This area was, is and will continue to be a great place to live and raise a family.”