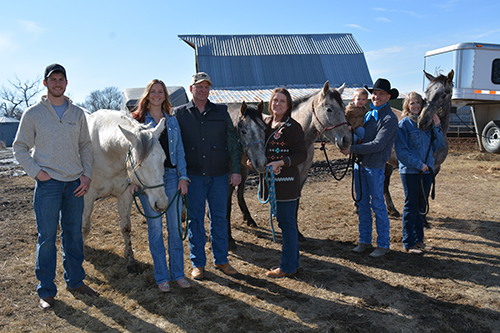 Kristen Gonsoir’s first horse was a small, naughty pony a neighbor offloaded for the horse-crazed 5-year-old to love. When its cantankerous nature didn’t deter their daughter’s affection, Kristen’s parents bought her the real deal – a mare named Cinnamon.

Kristen trained Cinnamon for 4-H reining competitions and by the time she was 12, the bourgeoning horsewoman was ready to try her hand at horse breeding.

“I insisted my parents take me to a special equine reproduction clinic at SDSU. Here I was, not quite a teen, in a room full of adults. I took notes and asked questions,” recalls the AQHA Professional Horseman, AQHA Specialized Judge, POAc Judge and Quarter Horse breeder.

Her parents helped her locate a stallion and Kristen found her calling.

“I have always loved horses, but it’s the breeding that is my favorite part because it’s the science aspect combined with horse aspect,” explains the high school chemistry instructor and young grandma, who enjoys sharing her first love with her greatest love – her family – husband, Tim, son, Stan, 29, his wife, Madeleine, and grandson, Dayton, 2, and daughter, Joellen Miller, 22, and her husband, Jordan. “It was fun family time together, whether it’s riding together or we’re going to a horse show or rodeo.”

Even today, horses are at the center of most Gonsoir family time. Pull into their Groton farmyard on any given day and you’re apt to find the family together cleaning stalls, driving out to check cows, working horses in the arena or, if their chores are done, at the living room table playing cards or board games.

“I like the family part of it,” explains Joellen, who lives just about 17 miles north on Jordan’s family’s farm/ranch and is currently pursuing a business degree at Northern State University. “Cleaning the barn isn’t fun, but it’s fun to come out and be with family.”

“And, it couldn’t be done without the family working together,” says Madeleine, who works for a western clothing store in Aberdeen while completing her South Dakota certification to teach.

She explains that with the entire family working off-farm jobs, it takes everyone to keep up with the demands of the family’s horse and cattle operation.

In addition to breeding and training horses and the family’s cow/calf herd, Tim is the feedlot manager for an area cow/calf operation; Kristen is the chemistry instructor and speech and debate coach at Groton High School; Stan works as a large animal assistant at Groton Vet Clinic and Jordan works on his family’s farm/ranch.

The family’s interest in horses and cattle extends to their volunteer work. Madeleine volunteers at SPURS Therapeutic Riding Center, Joellen and Kristen serve on the Brown County Fair Board and Kristen coaches county and state 4-H equine quiz bowl teams and hippology teams.

Like his wife, Tim’s passion for raising cattle began when he was young. “My dad died when I was 10, so we had to move off the farm and into town. My older sister got married to a farmer/rancher, so I spent as much time as I could out helping them with the livestock,” Tim says.

Tim and Kristen met in high school during a horse show banquet dance. When they started their family, they both wanted to raise their children around cattle and horses, so they moved onto Kristen’s mom and dad’s old abandoned homestead.

From the start, her focus is to breed quality all around horses.

“These horses are horses you can take into the show ring or out to work cattle. We work to promote an all-around versatile horse,” Kristen explains.

“Our horses are all over the nation. We have horses leased to the SDSU equestrian team, doing fox hunts in South Carolina, running barrels in New York and everywhere in between,” Kristen says.

As kids, Stan and Joellen spent every spare minute with their parents, working with cattle and horses.

“I started my first horse when I was 10,” Stan recalls. “We lived in the middle of nowhere, so instead of hanging out with friends, I would ride and work horses.”

Joellen refers to a horse, Sparky, as her babysitter. “My parents would be working cattle and they would put me on Sparky, and she would go graze and I’d just sit there while they finished doing whatever work they needed to get done.”

When Stan was about 12, the family moved from the farm which was about 13 miles from town with poor gravel roads, to the farmstead they call home today, right off Highway 37, just a five minute drive from Kristen’s work.

It was here that the Daddy’s Legacy pedigree of Quarter Horses began. Kristen wanted to breed a mare her dad, Dayton Krueger, helped her pick out as a teen one last time.

“My dad and I went together to pick out the stallion,” Kristen recalls.

The night before the foal was born, Dayton, an over the road trucker left South Dakota for California. A few days later, he called Kristen to check in and hear how the new foal was doing. That night, Dayton died of a massive heart attack. He never got to see the foal.

“At the visitation, a horse friend of ours said, ‘you should name the foal Daddy’s Legacy,'” Kristen says, of the pedigree that continues to honor her father with each newborn foal.