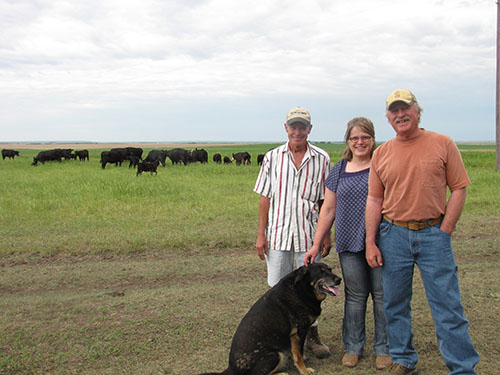 Rock hound and fourth-generation Dixon farmer, Terry Springer, 65, says when he’s outdoors he’s always on the lookout for a stone that catches his eye.

“Ever since I was a little boy, I’ve been walking around with my head down,” explains Terry, who over a lifetime has amassed a rare and extensive rock collection.

Many of the rocks were discovered on the land his great-grandparents and uncle first farmed in the early 1900s. The land where today, he and his brother, Wayne, 60, continue the family’s farming legacy. Together they raise corn, small grains, forage and a cow/calf-to-finish-direct-marketing beef operation, Springer Farms.

“I like living in the country and being my own boss. I enjoy working with cattle and being out working in nature,” said Wayne, who at 19 bought the farm neighboring the land his great-great uncle Hans homesteaded near Gregory.

When the neighbors were ready to retire, Wayne explains that they asked him if he was interested in the land, because they knew he would take care of it. “Even in the late 70s investors were buying up farm ground around here. They sold the land to me because, in their own words, “they wanted their farm to remain a working farm and didn’t want it to become an abandoned homestead,’” Wayne says.

He adds that the land he owns was originally purchased by his great-grandfather Carl in 1904, one year after it was homesteaded. Carl lost the farm during the Dirty Thirties.

The brothers can empathize with the challenges their grandfather faced.

During the Farm Crisis of the late 1970s and early 80s, Terry drove truck to help keep the family’s farm afloat, while Wayne and their dad, Verlyn, farmed.

Today, with crop and livestock markets at barely break-even levels, the brothers are making some creative changes to the way they farm and ranch.

“Now-a-days, a traditional farm is not self-sustaining. You either need to increase volume or do what it takes to reduce inputs and cut out the middle man,” Wayne explains.

To cut input costs, this year the brothers planted 14 acres of open-pollinating corn, which they will harvest this fall and set aside for 2018 seed. They increased their forage acres and planted fewer acres to Round-up Ready corn.

“We’re doing some old-school things,” says Terry, who farms the land Hans homesteaded. “Our grandpa used to raise his own seed,” explaining that this change alone will save the farm hundreds in input costs.

“Traited seed is selling for $300 a bag. We can’t justify that when corn is only bringing $3 a bushel,” Wayne adds. “We’re experimenting this year. I’ve been told the yields won’t be as good as the hybrid corn, but I want to see for myself.”

Instead of marketing their calves through the local auction market, they have begun to direct-market their beef as antibiotic-free, grass-fed and finished on GMO-free corn.

“From the day the calf hits the ground, we can tell our customers exactly what we fed it. We are the ones who go out in the blizzards to care for cattle and muck through mud to pull calves – the packers should not be the only ones bringing home a profit,” says Wayne, a strong advocate for Country of Origin Labeling otherwise known as COOL.

Wayne and Terry explain that prices forced them to look beyond the norm, to find new ways to keep their farm profitable.

“I don’t know if its plain stubbornness – we really don’t want to do anything else,” Wayne says.

To hear a radio interview with the Springer brothers, click here.

DenaMarie Springer takes salvaged wood and gives it a second take on life as a beautiful cross, coat rack, a shelf or numerous other home accessories.

“I grew up around wood working and I was trying to find a creative way to bring some more money onto the farm,” explains DenaMarie, who has helped maintain the farm record keeping for her husband, Wayne and brother-in-law, Terry since 2008 when she and Wayne married.

A town kid who always wanted to live on a farm, DenaMarie easily fell into farmlife – running for parts, raking hay and doing the bookwork. Humble Creations allows her the flexibility to continue to work on the farm. She set up a woodshop in an old farrowing shed and sells her hand-crafted pieces through Facebook.

“I am inspired by whatever happens to come to me while I’m working on them. I may have an idea and I try to put it together and it doesn’t go together. A lot if it, is messing with it and seeing which way looks the best,” she says.

To see her creations for yourself, visit Facebook and search Humble Creations by Dee Springer.