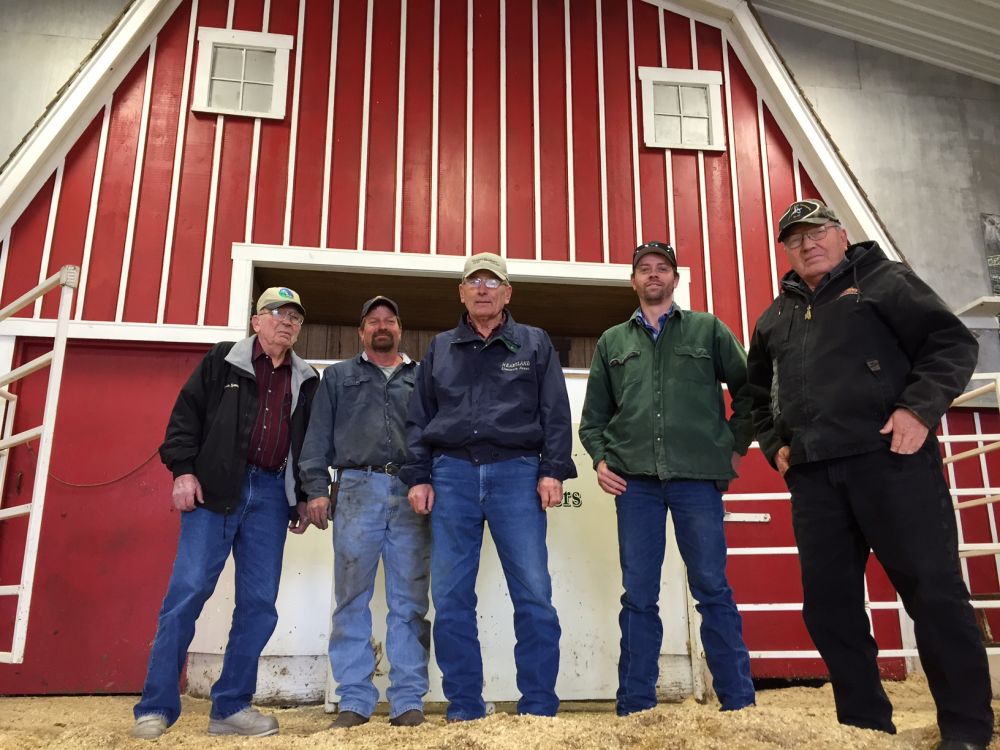 This month, we’re highlighting the Symens family who raise crops, purebred Limousin cattle and a feedlot near Amherst.

“It’s a garden spot … if we get rain,” says Paul Symens, 72, when describing the land his grandpa, Harm Symens, purchased in 1910 near Amherst.

For more than a century, the Symens family has cared for and farmed the land, which today supports a diverse farming operation that includes cropground, purebred Limousin cattle and a feedlot managed by Paul, his two brothers, Irwin, 80, and John, 69, Irwin’s son, Brad, 46, and Paul’s son, Warren, 38.

Since the beginning, rain – the lack of or over-abundance of – has played a significant role in the management decisions made by the Symens family.

For Harm and his son, Wilbert, the Dust Bowl days made soil conservation and erosion control a focus of their field management.

Irwin recalls a 1936 story of his dad planting corn in May which didn’t sprout until September when it received its FIRST rain … only to be killed by frost at 6-inches. “That same year dad mowed 160 acres of ground and all that grew was thistles. He stacked the thistles, mixed them with molasses and that’s what he fed the cattle. That was the year I was born,” says Irwin, who is the second oldest of nine children raised on the farm by Wilbert and his wife, Inga.

Implementing novel conservation techniques, like tree belts and strip tilling, earned the family some fame when in 1936 Harm was featured in Cappers Farmer magazine under the headline, “Uncommon Effort Won Over Drought.”

Today, the Symens continue the legacy of conservation, managing their fields with minimal-till techniques to increase water infiltration and leaving half of all corn stubble in the field to build organic matter. The stubble removed from fields is used as bedding for cattle. It is then reapplied once it’s been utilized as bedding. “At this point it’s partially decomposed and has added nutrients of the manure,” Warren explains.

“Dad always taught us that all new wealth has to come out of this ground. Whether you mine it, grow it or fish it out of the sea – it all comes out of this ground and we are in charge of taking care of it,” Irwin says. Irwin and his wife, Cleo, have four grown children: Susan Hardina, Jeannine Walker, Connie Christians and Brad.

During the Depression years Wilbert slowly began expanding the farm, renting land from insurance companies. “They said, ‘If you get a crop, please pay us a little,'” Paul explains. “In those days the insurance companies ended up owning a lot of land because farmers who had rented it from them could no longer pay.”

Timing, Paul adds, like in most things, is a big reason his family is still farming today. “There were a lot of good farmers in the late 20s who bought land planning on a great future, but the 30s changed that. There was nothing you could do about that. My dad got his start with grandpa and renting land.

Dad often said that looking back, times were tough and it was bad, but he said, we would never see the opportunities he had because it takes so much more investment to get started.” Paul and his wife, Faye, have five grown children: Patricia Laedtke, Jill Beaner, Jeffrey, Stephanie Webster and Warren.

Wilbert bought the farm from Harm in 1941. In 1973, South Dakota State University named Wilbert Symens an Eminent Farmer. He retired in 1966, which is when his sons formed a partnership, Symens Bros. Listening to his sons and grandsons visit about the farm today, it’s obvious that Wilbert’s philosophy on conservation and progressive farming methods is still very much alive in 2016.

“I’ve been handed opportunity – we all have with this farm – so we all work not to get ahead of ourselves and to learn from our mistakes and make the most of this opportunity we’ve been given and take care of the land for future generations,” explained Warren.

In order for the farm to support five families, the brothers and their sons have relied more on diversification than expansion. “We are always looking at how we can maximize our profit per acre, whether that is in grain or livestock,” explains John, who together with his wife, Shirley, have a grown daughter, Carmen Huizinga. “Dad and grandfather never shipped anything off the farm unless it was ready for market – whether that was cows or hogs.”

John manages the family’s 275-head purebred Limousin herd. Early on, each son took over managing the aspect of the farm they were most passionate about. Irwin was responsible for crops; Paul took over the commercial feedlot operation.

Today Irwin and Paul have taken on more advisory roles, with Brad and Warren managing the crops and feedlot.

“We continue to make all major decisions together,” Irwin says.

Like their dad and grandpa before them, the older generation is good about listening to the younger generations’ ideas, says Brad. “They are good about taking the time to listen to our ideas and explain things to us.” Brad will marry Jenn Meintsma June 18.

Paul adds, “It allows us each to do other things, which if we farmed on our own, we couldn’t do.” Paul served eight two-year terms in the South Dakota Senate (1987-1994 and 1996-2004) and has been actively involved in his church and community, serving on several cooperative boards and South Dakota Farmers Union, recently retiring from 36 years serving on the Farmers Union Industries board and in 2004 Paul was recognized by SDSU as an Eminent Farmer.

Although the men have always been conservative spenders, they have also been quite progressive – Wilbert was the first of their neighbors to apply commercial fertilizer to his fields. “Dad read everything. He worked with SDSU and Extension a lot. He got all their pamphlets and materials,” Paul says.

Following his dad’s footsteps, Irwin has been actively involved in the Marshall County Crop Improvement Association since the 1960s. He even raised seed for the organization. “Seed genetics and technologies have come a long way – and the new breeds of corn have really impacted yields,” said Irwin, who has also served on several boards including Zion Reformed Church of Amherst, Brown Day Marshall Rural Water Board, Marshall County Conservation District and South Dakota Association of Conservation Districts.

Wilbert did however ignore the experts’ advice when it came to crossbreeding. “They told him cross breeding wouldn’t benefit his cattle herd,” John said.

Progressive in all aspects of their farming operation, in addition to extensive EPD data, John has been collecting DNA data from the purebred herd for a while now. “We have been testing all females and bulls for the last few years. We know it’s coming and we want to be on the forefront when when it arrives,” says John who, like his brothers, has served on his church and other boards including Livestock Breed Associations throughout the state and nation, the South Dakota Beef Breeds Council, South Dakota Beef Industry Council and United States Meat Export Federation.

The family hosts their annual production sale the last Thursday in February. The event is held in a new sale barn the family built in 1980. The arena’s backdrop is a vintage barn built by Wilbert in his retirement.

While their children were growing up, Cleo, Faye and Shirley kept busy at home and in their communities where they served as 4-H leaders, played piano and organ in church and helped host Farmers Union day camps. All three women remain actively involved in their church and communities even today.

For several years, the women have actively helped raise funds for Relay for Life to raise funds for cancer research. Cleo serves as the local co-chairperson. “We live in small communities and attend small churches; everyone needs to be involved,” Shirley explained.

In recent years, excess moisture led the family to build hoop barns to house their feedlot cattle. In the process, they are better able to manage nutrient application and the cattle have responded to the controlled environment with increased gain and no feed waste.

“Their intakes are consistent because they aren’t fighting the elements. We have never scooped bunks with the exception of some rain water that might blow in.”” explains Warren, who lives on the farm with his wife, Stephanie, and their three young children. Stephanie is a librarian and teaches junior high and high school physical education for Britton/Hecla.

Paul adds that of all the elements, extremely hot days are when the hoop barn really keeps cattle comfortable. “It was a 90-degree day with no breeze. I moved the cattle out to clean the pens and just stopped. There was no breeze outside of the hoop barn, but inside, thanks to the air exchange, it was at least 10 degrees cooler and there was air movement,” he says. “I have cattle buyers stop by and say they never see cattle this content.”

An unexpected benefit to the hoop barns is the fact that there are no flies because the cattle’s hoof action on the manure pack won’t allow fly larvae to survive.

For more pictures of the Symens Farm Family check out our Facebook page https://www.facebook.com/South-Dakota-Farmers-Union-277721538812/