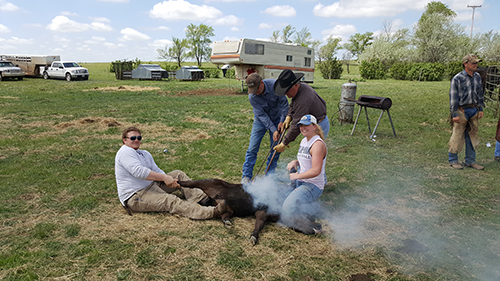 When Cheryl and Fred Schaefers tied the knot 40 years ago, the two farm kids shared a strong passion for farming. And, along with crops and livestock, the couple wanted to raise a large family.

“We originally wanted 12 kids. Fred is the youngest of 9 and I am the second oldest of six ­ we wanted a house full of noise and love,” Cheryl says.

“What better way of life is there?” Fred asks.

“The kids all learned to care for life and that every life is important ­ because they understood that it mattered to the farm’s bottom line,” Cheryl added.

The early years were busy, but happy. All seven of their children were born two years apart. “Whatever we were doing, I’d just pack up the kids and bring them along. We even put a swing in the milk parlor so the baby could watch us and swing while we milked,” Cheryl says.

The couple began milking their first Holstein just 10 days after they married. It was 1976 and Fred says Hand County was full of small 50 to 75-cow dairies. “There was money in dairying. It was a good steady income.

At one time there were at least 30 to 40 dairies in Hand County.” Slowly, they expanded their dairy herd to 80 cows.

The entire family helped with milking. As a young kid, Paul recalls carrying buckets of grain to each stanchion. “Then we installed an automatic feeder,” Paul remembers.

“You were replaced by technology,” his wife, Blair, jokes.

Paul and Blair celebrated their first anniversary this May. Like Paul, Blair grew up on a farm. “This way of life isn’t new to me,” explains Blair, who works as a nurse for Faulkton Area Medical Center and Good Samaritan nursing home in Miller.

Paul says the farming lifestyle was one reason he wanted to return to his family’s farm full-time after completing a deployment. Paul and four of his siblings are veterans.

Growing up, Paul and his siblings helped do everything on the farm ­ from grinding feed for hogs to feeding the hogs and cattle before and after school.

“It got to the point where the cow-herd was half mine and half dad’s. It was just easier to have one person running the place,” Paul explains.

At 63, Fred is by no means retired. He continues to be involved with the day-to-day activities of the farm, but works as Paul’s employee.

“I always hoped one of the kids would want to come home and take over the farm,” says Fred. He explains that when he decided to farm full-time after high school, his dad, Harry, was 68, and with the help of his social security check, was able to hand the farm over to Fred.

Over the years, like many South Dakota family farms, the commodity focus of the Schaefers’ farm has evolved – driven more by the markets and fate than personal preference.

“When I got started in farming right out of high school, I raised grain, hogs and beef cattle. Then we got into the dairy business and began expanding that,” Fed explained.

In the 1980s when beef markets crashed, they got out of raising beef cattle and stuck with the dairy cows and hogs.

Being open to opportunities and flexible enough to make changes to the commodities they raise has been key to keeping their farm afloat, Cheryl explains.

“You have to be open to new ideas and trying different things out,” she says.

Cheryl explains that perhaps the biggest change they made was forced upon them when their milk barn burnt down December 1992. It was winter; they couldn’t rebuild right away and their cows needed to be milked ­ but their equipment was lost in the fire. They auctioned their dairy herd the next day.

The cost of building a new barn and cow herd discouraged Fred and Cheryl from returning to the dairy business.

Looking for a steady income stream to replace their monthly milk check, Cheryl launched her own business, Cheryl’s Catering, in 1993. A full service catering service, Cheryl caters gatherings, large and small, across the state. She works out of a commercial kitchen in Polo.

Many South Dakotans have had an opportunity to experience Cheryl’s Catering, as she caters the S.D. Farmers Union Farmers Share Luncheon which feeds more than 1,000 fairgoers in one hour at the South Dakota State Fair annually. Along with events, Cheryl spent 14 years operating the Ft. Pierre Livestock Exchange Café.

“I’ve always liked cooking. When I was 15 my mom broke her back, so I became the cook in our household and learned pretty quickly how to prepare large meals for our family and all the hired help,” Cheryl says.

“She is not kidding. She can cook all day and then watch the cooking channel at night,” Fred says.

When Cheryl started her business, her dad, Wayne Peterson gave her some valuable advice. “He said, ‘Have you gotten over being a farmer enough that you can make a living being a caterer?’” Like their farm, Cheryl’s Catering is a family business. “I always needed help. And, you need to bring your help with you. So, my kids helped me prepare food and were often my servers. Many times, they’d bring their friends along.”

After they exited the dairy business, Fred turned his focus to hogs for a few years. Then in the mid-90s, when hogs were selling for 9 cents a pound, he reinvested in the beef cattle market. The farm’s focus is on their cow/calf herd and small feedlot.

To protect themselves in the current market lows, the Schaefers are doing all they can to tighten their belts and Paul markets grain and cattle utilizing risk management tools.

“I attended a meeting in 2014 and started working with a stock broker. It at least helps us protect ourselves in case the price collapses,” Paul says.

The family is concerned about the current crisis. This September, Fred and Cheryl joined with about 30 other South Dakota producers and flew to D.C. to visit with Congressional delegates about what is going on in farm and ranch country as part of the Farmers Union D.C. Fly-In.

“There is a real problem out here with commodity and cattle prices. I’m concerned about the fact that during the current Presidential race we have not heard one word about agriculture. I see a bigger problem come next spring. Even now, a lot of bankers don’t want to finance these young farmers,” Fred explains.

Life on a family farm is busy ­ there are always chores and things that need fixed. Along with a strong work ethic, Cheryl and Fred also instilled in their children a strong faith in God and Country.

Five of their seven children are veterans. After waiting through eight deployments, Cheryl and Fred say they have been blessed. All five children made it home.

“One day Fred told me, ‘We won’t keep being this lucky, to continue getting our children back.’” Their daughter, Josie, was deployed in 2003, their son, Sam, daughter, Paivi, and sons, Jacob and Paul, were also deployed from 2006-2007. Paivi was the last to return home from a deployment in 2012.

“Where some may take our freedom for granted, now that our children have served, I have a strong respect for the Armed Services,” Fred explains.

Cheryl adds, “I am relieved my kids are home, but I pray for world peace because I don’t just care about my kids; I care about everyone’s kids.”

In honor of Vetran’s Day, S.D. Farmers Union highlighted the Schaefers’ siblings in a recent article. To read this article click here.