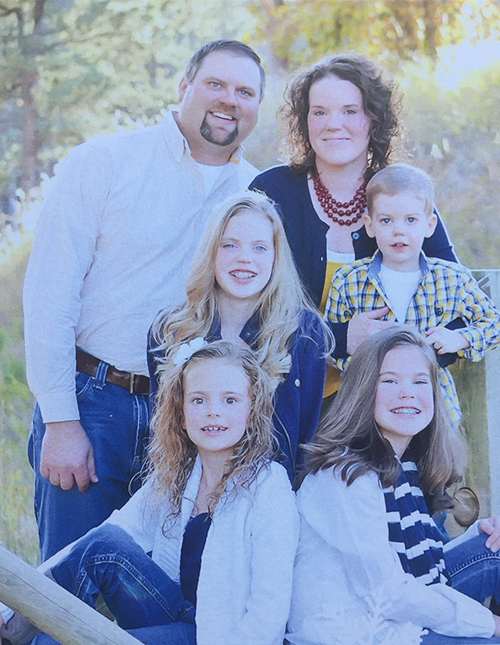 Neal Richter began helping his dad move cattle on the family’s ranch near Enning when he was about 8.

“That was a bad idea because I was hooked,” jokes Neal, 36, a fourth-generation cattle rancher.

In fact, so strong was Neal’s desire to make ranching his life’s career, that as a high school student, he took on extra classes so he could graduate a semester early to be home fulltime for calving.

“That first calving season, it happened to be a nice January and February, with 40 to 50 degree days. Calving was easy, I thought, ‘this is great. The next calving season wasn’t so warm, but I’m still here,'” says Neal, who graduated from Sturgis High School in 2000.

Although his formal education ended that year, Neal’s intake of knowledge and information in regards to improving his and Dick’s cattle herd genetics and management is a daily practice.

He reads agriculture publications, takes in seminars and workshops and works closely with local SDSU Extension staff. In 2010, he participated in SDSU Extension’s first beefSD class. An intensive three-year program led by livestock experts and innovative South Dakota cattle producers, who provide cattle producers with research-based information on everything from improving genetics and cattle health to feed rations and grazing practices. Through beefSD, Neal was able to collect data on five of his calves – from weaning through the feedlot and on to processing.

“Ranching is just like other careers, there is always more information available to improve things, so I have to work to keep on top of it,” he explains. “beefSD opened my eyes to how what is happening here on the ranch will impact what happens down the chain.”

Among the management practices which have improved things is hay testing and supplementation. This was one of the topics covered during beefSD that made sense to Dick and Neal. So, today, the men have their hay tested to ensure they are feeding their cows a balanced ration. “We feed supplements as needed based on test results,” Dick says.

The men market their calves at weaning, so birth weight and vigor are a large focus of their breeding program.

“We used to wean, feed and then sell,” Dick explains. “In this country, we don’t raise our own corn. Most of what we grow is to replenish hayground. So, when the calf prices started coming up, and we could make more money selling them right off the cow, without feeding them, that’s what we decided to do.”

And, according to the feeder/finisher who has been buying the Richter calves several Octobers in a row, they gain and finish well.

“The guy who bought them said 75 percent of them graded choice,” Neal says. Although the same buyer bids on their cattle each year, when it comes to marketing their calves, the men are loyal to Ft. Pierre Livestock Auction Inc. “Marketing is a terrible big part of ranching. Even before Neal started ranching with me, I took the calves to Ft. Pierre and I thought they did a good job by me,” Dick says.

Neal adds, “They have gotten to know us over the years. They know our brands and they will call us when someone is looking for the type of cattle we raise.”

The men raise mostly black baldy cattle, from black Angus cows, which they breed to Charolais bulls. “Our goal is to get to all F1 cross cows,” Dick says. “My dad was one of the first in the area to raise black cross in the area. And, at that time, if you weren’t raising Herefords, you weren’t thought too much of.”

Dick and Neal are partners in the sense that they run their cattle together, share labor and expenses.

It’s a bit different from the way Dick took over for his dad, Joe.

Growing up, Dick was the youngest of five boys. “Neighbors always accused Dad of raising a haying crew,” Dick jokes.

Dick says he always enjoyed ranchwork, but because Joe and Elsie’s ranch was small, he never anticipated he would be able to stick around after high school. “We knew that once we made it out of high school, we were going to work off the ranch,” he says.

When he and his brothers, Fred, Carl, Ted and Bill, were young, the livestock on the farm was diverse. “We had 21 milk cows, about 50 commercial cows, pigs and chickens.”

After high school, Dick went to South Dakota State University for a year and decided he needed to be closer to home, so he began taking classes at Black Hills State University and eventually completed a four-year degree in business administration.

While he was working to finish his degree, community members approached him asking if he would take a break to teach at the Union Center school. “They knew I was qualified to teach with a two-year degree. I didn’t know anything about teaching, but I took on the challenge.”

Dick says that although the kids tested him, he had a lot of community support. “We didn’t have teacher in service or parent- teacher conferences. The teacher was invited to dinner. And, it was expected that you’d show up. That’s where the parents got to know you.”

He adds, “I was ill prepared. I had to teach myself how to teach. I enjoyed the kids and watching them learn.”

From 1967 to 1975 he taught school five years and completed his degree. He taught fifth through eighth grade at Union Center Country School and seventh and eighth grade in the Enning Country School. At the time, Dick received $3,850 a year for teaching.

During the school year, he helped out on the ranch. Joe paid him in cattle. During the summers, he did construction work, which led him to start his own construction company.

From 1975 to 1991 he built several residential and commercial buildings throughout western South Dakota and eastern Wyoming. Locally, he oversaw the volunteer crews who built the Community Center in Union Center and the Enning Ambulance building. Dick gave back to his community in other ways as well. He served more than a decade on the Rural Electric Cooperative Board and as president of the board for the Enning Volunteer Ambulance.

Most of the income his construction company earned, Dick invested back to the ranch, buying or leasing more pastureland and cattle. His late wife, Nancy, supported the family.

Dick returned to the ranch full-time in 1991, after his dad passed away. To help the couple manage two, off-ranch careers, as well as the ranch, the family lived in Sturgis where Neal and his brother, Bryce, attended school. “She would go that way and I would go this way,” Dick recalls.

Bryce says living in town and working on the ranch gave him and Neal the best of both worlds. “We gained a lot of experiences from both. The work ethic I have today is the main thing that I acquired from work on the ranch, where I was able to see what a good day’s work is as opposed to what others see as a good day’s work,” explains Bryce, who lives in Sturgis with his wife, Kristen, and their four children, Ryleigh, 14; Jordyn, 12; Madisyn, 10; and Ryne, 6.

He works as an ag loan officer in Sturgis. In addition to work and family, Bryce serves on the Meade 46-1 School Board and volunteers to coach soccer. He says he inherited his dad’s “neighbor mentality.”

“What I mean by neighbor mentality is the ability to have a conversation with anyone about any topic and although we focus on our family first, we are always willing to do anything for those who need help,” Bryce says.

He adds that he is thankful his brother Neal is carrying on the family’s ranching legacy.

“It makes things feel complete and whole. I am glad we are not faced with the situation that many are, where the family operation was sold off and will not continue on. If that was the case, it would feel like something was very much missing,” Bryce says.

Since Neal returned to ranch full-time with him, the men have more than doubled their cow herd and leased or purchase land to accommodate the expanded number of cow/calf pairs they raise. In Meade County, it takes about 20-25 acres of grassland to run a cow/calf pair per year.